The 39 Steps on PBS vs. Closing ceremonies – no choice

Ok, I know the Olympic closing ceremonies are on tonight. But, there will be another closing ceremonies in 4 years, so it’s time for you to take a stand, DVR it, and then watch the newest adaptation of The 39 Steps instead. The show airs as part of the Masterpiece series tonight (Sunday) at 8:00pm CT […]

END_OF_DOCUMENT_TOKEN_TO_BE_REPLACED 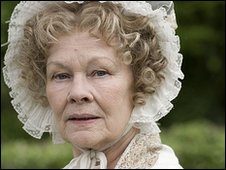 Forgive us for this British TMZ moment

This one was just too good to pass up. Let me just say this upfront. Dame Judi Dench is the most amazing person on the planet. She’s played two Queen’s, is James Bond’s boss, M, won an Oscar, ten BAFTA’s, two Golden Globes, a Tony and, oh yeah, she was in 67 episodes of As […]