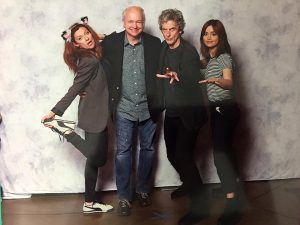 Bill, second from left, with Twelfth Doctor Peter Capaldi along with Michelle Gomez and Jenna Coleman.

Here on Tellyspotting, you’ll find news and perspective on UK comedy, drama and mystery, in addition to the history, back stories and people behind those programs.

Bill Young launched Tellyspotting on Oct. 1, 2009. As Vice President of Television Programming at North Texas Public Broadcasting station KERA, he has great access and opportunity to evaluate much of the British TV catalog for possible broadcast to American PBS audiences.

Tellyspotting goes beyond what airs on KERA or even PBS, however. You can expect updates, reports and commentary on shows by BBC, ITV, Netflix and other sources, as well as classic TV.

We’ll even cover British film, radio and literature from time to time.

If you’re as passionate about UK television programs, acting and culture as Bill is, say hello at byoung@kera.org or follow him on Twitter.

Tellyspotting is a component of KERA TV, the PBS member station in North Texas. Contributing to KERA TV supports our coverage of British TV news and commentary here on Tellyspotting.

• KERA television programming on our main channel, 13.1; KERA Kids on 13.2; and KERA Create on 13.3
• Our business profile show, CEO
• Our programming online at video.kera.org