The greatness that is Mark Gatiss

END_OF_DOCUMENT_TOKEN_TO_BE_REPLACED 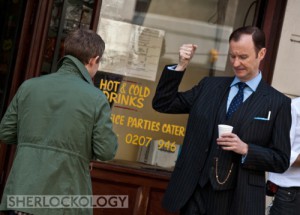 Unbeknownst to Sherlockology, the ‘unofficial’ organizer of the worldwide Sherlock support group, the first meeting of the season has called to order. For those wishing to join, we will be virtually meeting periodically between now and 2012. Amidst rain, riots and rumors, cast and crew plodded along this past week as they continued the filming of “A […]