FINALLY! We are now at a point where we are merely a matter of hours, not days, away from the long-awaited premiere of season 3 of Downton Abbey tonight on PBS. Watching parties are in their final stages of preparation, individuals are feverishly sending out ‘do not call’ notices via Facebook and Twitter and, much like their NFL fan counterparts who sport their favorite team and player jerseys throughout the playoffs, fans of Downton Abbey are also beginning to draw battle lines as to who they most identify with, the upstairs or the downstairs. 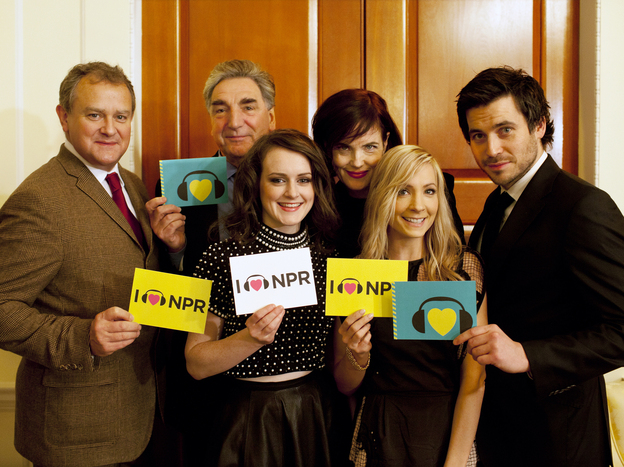 Whether you are new to the party or if you have been a Downton Abbey P1 from day one and would like to make sure you are ‘down with Downton’, here’s your chance to test your knowledge of the show’s historical context — and some of its plot points — with this NPR quiz. The first one is, perhaps, the easiest of them all. Where do you rank?

NPR’s Morning Edition co-host, David Greene, sat down this past week with the actors to discuss both the immensely popular period drama and their respective characters.

In Thursday’s interview with Hugh Bonneville, Elizabeth McGovern and Jim Carter, Greene was able to verify what I have always thought…it’s much more fun downstairs. According to Carter, who plays Mr. Carson, ….”there’s not so much hurly-burly upstairs and even Hugh Bonneville, who plays Lord Grantham, recognizes the fun quotient downstairs when he says, “…I’m sure there’s a lot more banter and bread-roll-throwing in the kitchen.

On Friday, Greene continued his behind-the-scenes look at the ever-popular British period drama by welcoming Rob James-Collier (Thomas, the malicious footman), Joanne Froggatt (Anna) and Sophie McShera (Daisy) who is probably at the bottom of the household hierarchy and forever under the watchful eye of Mrs. Patmore.

With a smile, James-Collier describes Thomas as “misunderstood”, Jim Carter divulges that there is a bit of fashion-envy with the upstairs by the downstairs inhabitants and Joanne Froggart reveals that, fashion-envy or not, the costumes are not that comfortable to wear, upstairs or downstairs. And, in true Mrs. Slocombe fashion, they are unanimous in the fact that there it is much more fun downstairs than upstairs.

Listening to both, just to be clear, I still remain steadfast in the thought that I’d like to live downstairs with upstairs money. Ok, it’s about time to turn your cell phone off…