Don’t look for Julian Assange to be standing next to you in line to buy a ticket to the November 2013 premiere of The Fifth Estate anytime soon which is currently in production. During a video-link hook-up from his refuge at the Ecuadorian Embassy in London, Assange told a group of Oxford University undergraduates that the upcoming Dreamworks film, directed by Bill Condon and stars Benedict Cumberbatch as Assange, Downton Abbey star, Dan Stevens, Laura Linney and Peter Capaldi, was a “massive propaganda attack“.

The Wikileaks founder, supposedly holding what looked to be a script to the film which was written by The West Wing‘s Josh Singer, went on to tell the Oxford Union that Condon’s film began with scenes inside a military complex in Iran, where nuclear symbols could clearly be seen. The suggestion, he said, was that the country was building a nuclear weapon that the film was clearly an attempt to go about “fanning the flames” of war. “How does this have anything to do with us? It is a lie upon lie,” he said. “The movie is a massive propaganda attack on WikiLeaks and the character of my staff.”

The Fifth Estate is based on Inside WikiLeaks: My Time With Julian Assange at the Worlds Most Dangerous Website and WikiLeaks: Inside Julian Assange’s War On Secrecy, by the Guardian’s David Leigh and Luke Harding.

Some of the first photos surfaced earlier this week with a rather creepy one of Sherlock star, Benedict Cumberbatch, sporting Assange-like blonde hair. Sadly, all I could think of was how creepy and out of place I always thought seeing Tom Cruise as the vampire Lestat with blonde hair in Anne Rice’s Interview with a Vampire. This photo, however, from the Guardian’s Steve Rose, adds a bit of ‘elementary’ Sherlock-style deconstruction to see if there are any clues to the film that we can uncover. Do a quick roll over of the photo with your cursor to see what I’m talking about. 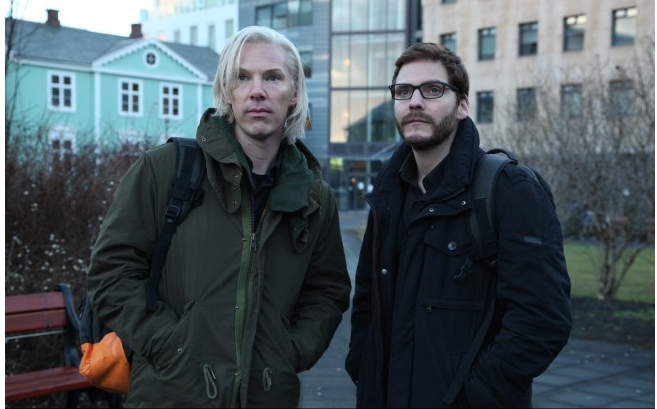 I’ll wait before passing judgement either way. Remember, not too long ago how everyone scoffed at the idea of a movie about Facebook. Rightly or wrongly, The Social Network did win two Oscars. Full disclosure, I had no interest in seeing that one. This one, however, might be a different story. How about you? What do you think?