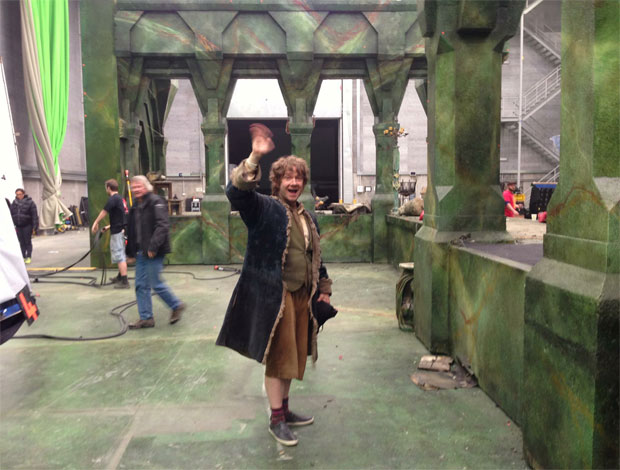 If you happened to have been trolling around the Internets this past weekend and came across Peter Jackson’s Facebook page, you would have been one of the first ones to know, outside of those involved in the production of course, that principle filming has, as long last, concluded on Jackson’s Hobbit trilogy. For Martin Freeman (Sherlock, Hitchhikers Guide to the Galaxy), who stars as Bilbo Baggins, it’s been a long 2.5 years in Middle-earth. In a photo that Jackson posted on his Facebook page, it’s no wonder Freeman had a big smile on his face as he walked off the set for the last time in Baggins’ feet.

Not only did Jackson post a classic photo, the Hobbit director took time out to pay tribute to Freeman on his final day on set by saying, “The end of an incredible two and a half years. I cannot imagine anyone else in this role, a character that Martin has nurtured and crafted with love and great skill.”

If that wasn’t enough, Jackson then had a unintentional gift of greatness to Sherlock and Benedict Cumberbatch fans worldwide as Smaug stopped by to say his goodbyes to Middle-earth with this awesome pic with the caption, ‘Smaug admires Bilbo’s feet’. Why am I so jazzed about the fact that both Freeman and Cumberbatch are leaving Middle-earth after 2 and 1/2 years? Obviously, that means only one thing. It’s time to begin filming the final episode of the next series of Sherlock, of course. According to reports, Sherlock filming resumes in August. 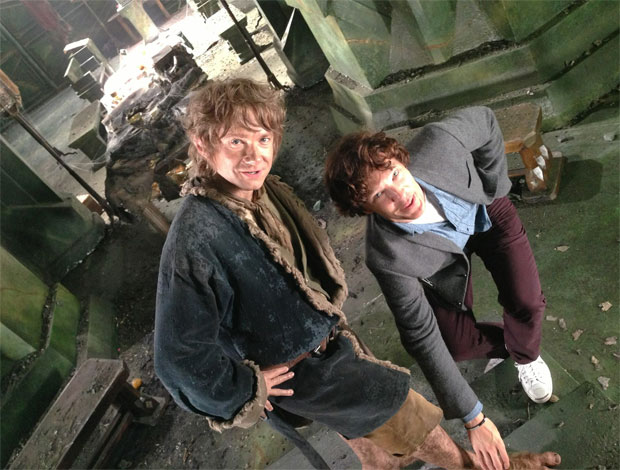 As if Lord of the Rings and Hobbit fans need a reminder, Jackson’s trilogy began with The Hobbit: An Unexpected Journey, which was released late last year. The next installment, The Desolation of Smaug, is set to debut on December 13 of this year and followed by There and Back Again on December 19, 2014.