While it won’t erase the daily reminder that we still have 14 months (plus or minus a few days) until Benedict Cumberbatch returns to the small screen in Sherlock, the recent discovery of a long thought to be lost Sherlock Holmes film will delight even the most casual fan of the world’s most famous consulting detective.

The 1916 silent movie about Sherlock Holmes has been discovered by the Cinematheque Francaise, which has joined with the San Francisco Film Festival to create a digital restoration. Cinematheque Francaise is a Paris-based archive that houses one of the largest film collections, movie documents and film-related objects in the world. 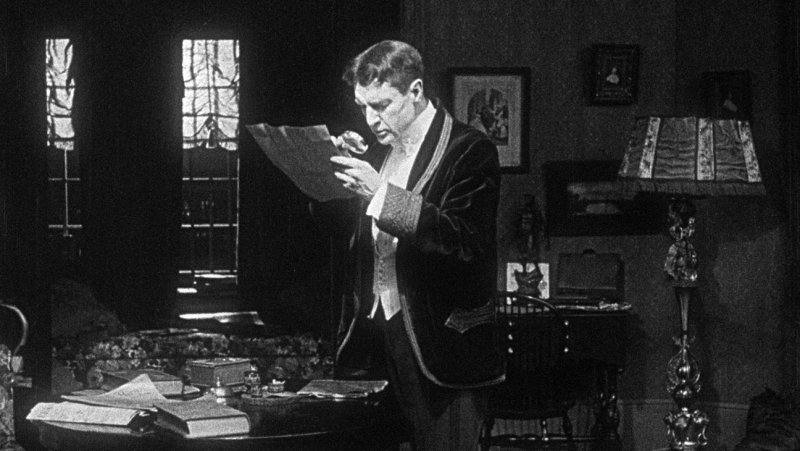 Titled Sherlock Holmes, the film stars American actor and playwright, William Gillette, who was one of the earliest actors to bring Sir Arthur Conan Doyle’s creation to life on stage, and is credited with helping to popularize both the deerstalker-and-cape image of the detective along with one of Holmes’ signature lines by saying to Holmes’ sidekick Dr. Watson, “Oh, this is elementary, my dear fellow.”

Produced by Essanay Studios in Chicago, which is best known for a number of Charlie Chaplin short films produced in 1915, the film is the only surviving example of Gillette’s performance as Holmes and is also the only film Gillette ever made.

Gillette’s play, and presumably the film, is a compendium of Holmes’s “best bits,” weaving scenes from a number of Arthur Conan Doyle stories into a single narrative ranging from “A Scandal in Bohemia” to “The Final Problem.”

“At last we get to see for ourselves the actor who kept the first generation of Sherlockians spellbound. We can also see where the future Holmeses— (Basil) Rathbone, (Jeremy) Brett, (Benedict) Cumberbatch and the rest—come from. As far as Holmes is concerned, there’s not an actor dead or alive who hasn’t consciously or intuitively played off Gillette,” Russell Merritt, the supervising editor of the restoration project and a member of the Baker Street Irregulars, said.

The restored film will be unveiled in Europe at the Cinematheque Francais’ festival of film restoration in Paris in January as part of the Toute la Mémoire du Monde festival, and will have its American premiere at the San Francisco Silent Film festival in May 2015.