While Thanksgiving isn’t officially celebrated in the UK, it has gained a bit of momentum in recent years with a number of restaurants serving Thanksgiving dinner and an increasing number of festivals, including the Harvest Festival where Brits give thanks for food and the year’s harvest. Should Cora’s mother Martha and/or crazy brother Harold blow into town and arrive unannounced at Downton for the holidays, I have to believe that a quickly pulled together Thanksgiving celebration effort would be nothing short of simple given the monumental nightly kitchen duties in preparing meals for the Dowager Countess and family on a daily basis. 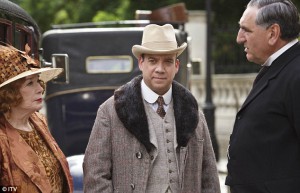 Obviously, Ivy, Daisy, Jimmy and Alfred are young and have a lot to learn but, under the watchful eyes of Mrs. Patmore and Mr. Carson, a traditional Thanksgiving dinner of turkey and all the trimmings would be a bit of a step back from their nightly preparations just for a normal dinner at Downton. Cora’s family aside, how does one even begin to cook for the Granthams?

Whether it’s a surprise birthday celebration for Robert complete with a jazz band, a ‘simple’ Downton house party featuring a performance by Dame Nellie Melba, or just welcoming Mr. Bates home from prison, no one can entertain like the Granthams. Thanksgiving or not, the Granthams know how to party as long as a gong is within earshot. And, I suspect, once she stops mistaking Robert for a waiter, the Dowager Countess really does know that a weekend is for entertaining.

Downton Abbey, series 5, premieres on PBS’ Masterpiece series beginning Sunday, January 4, 2015 at 9p ET/8p CT. For me, aside from family and friends, this is a pretty good day to be ‘thankful’ for Downton Abbey. What are you thankful for?