Once again, I look at the calendar, see it’s the day after Thanksgiving yet it has to be Christmas! It may be Black Friday to some but stay with me, it’s definitely the day before Boxing Day. Why, you ask? Really simple if you happen to follow Sue Vertue on Twitter. It was a simple tweet that included the familiar to all #221back from the Sherlock producer that verified Santa Claus had entered the building.

While most everyone has their countdown calendar already X-ing off the days until the next installment of Sherlock, which is headed our way this time next year, what you might not know is that the world’s most famous consulting detective is due to begin filming in January. On Monday, that will be NEXT MONTH folks! Two brief and very exciting tweets from Vertue suggest that Holmes and Watson might be traveling back in time next Christmas as they are seen donning period costumes looking more like how Sir Arthur Conan Doyle originally envisioned the duo. 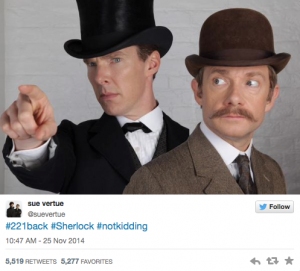 It was Vertue’s next tweet that definitely validates the old adage that a picture is worth a thousand words. It also might lead one to believe that the cast read-throughs for the oft-rumored 2015 Sherlock Christmas special have begun! Might we actually be in the presence of the possibility that “The Blue Carbuncle” could be the next time we see Sherlock and John? It just so happens that it’s the only Arthur Conan Doyle story that is set during Christmas AND is one of series co-creator, Mark Gatiss, favorites. Just sayin’…. 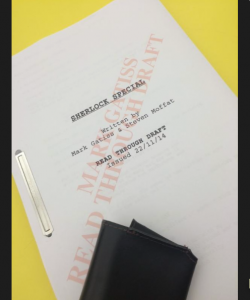 See? I told you it was Christmas. And, to think, you thought it was Black Friday….