It seems a bit out of character for anyone in America to look past Sunday, January 4, 2015 and the U.S. premiere of series 5 of Downton Abbey on PBS but we must spread the word and put all other period drama series currently in production on notice to be cognizant of the fact that the most popular British period drama in history resumes filming in late February 2015 with series 6.

One need look no further than Mapp and Lucia and what the most recent adaptation of EF Benson’s brilliant stories of feuding socialites Miss Elizabeth Mapp and Mrs Emmeline “Lucia” went through as it began production. When it came time to shoot the forthcoming series, it seems as though Downton Abbey got there first when it came to securing the necessary period garb. 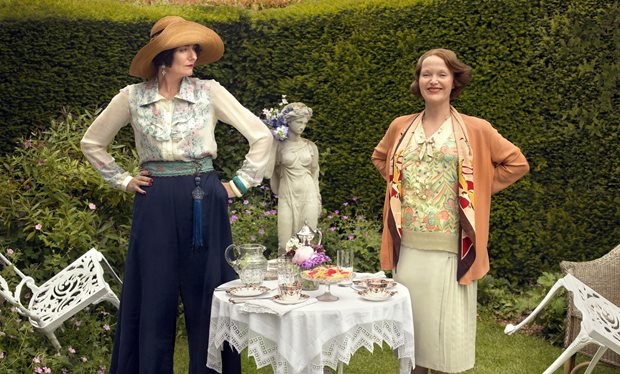 Anna Chancellor, who plays Lucia, explains: “Our French designer said to me [adopts accent], ‘Zere is nothing in London for you, Downton ‘as it all, we ‘ave to go to Paris.’
“So all my costumes came from the Parisian costume houses. We went from place to place on motorbikes, the producer very worried that we might not make it back. In fact, we didn’t – there was a strike and we couldn’t come home!”

According to Radio Times, Chancellor wasn’t the only cast member to have to ‘suffer’ for the sake of production authenticity. Although having difficulty getting back from Paris sounds a bit more tolerable than false teeth, a bushy ginger-dyed moustache and a shaved head.

Both Downton Abbey and Mapp and Lucia will show off their respective wardrobe choices this Christmas the Dowager Countess heading up the ITV1 holiday schedule and Mapp and Lucia a signature piece in the BBC lineup this season. With five series under their belt, one must think of Downton as the current champ with Mapp entering the ring as the challenger. As referee, it’s up to you to decide Christmas Day who the winner is.