In March 1973, a small grocer’s shop in Balby, a suburb of Doncaster in South Yorkshire, opened its doors. 40 years later, in Still Open All Hours, Arkwright’s is owned by Granville Arkwright (David Jason), the nephew of the now deceased Albert Arkwright (Ronnie Barker), the shops stammering, miserly original owner. To celebrate the 40th, the BBC commissioned a one-off special, dangerous till and all, last Christmas. The special, written by Open All Hours creator/writer, Roy Clarke and featuring a number of original cast members including Jason, Lynda Baron (Nurse Gladys Emmanuel) and Stephanie Cole, was a huge audience success prompting the commissioning of a full series which will return to the BBC1 Christmas schedule this year on Boxing Day at 6:30p. 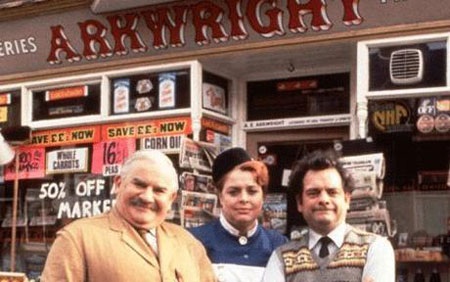 In conjunction with the series 40th anniversary, the BBC has released a top-notch book Still Open Hours: The Story of a Classic Comedy by Graham McCann, the author of books on Dad’s Army, Fawlty Towers, Only Fools and Horses and, his most recent effort, A Very Courageous Decision: The Inside Story of Yes Minister. The book is filled with the obligatory never-before-seen BBC archive material along with interviews and recollections from Roy Clarke, David Jason and a number of cast regulars. Clarke recalls that the shop is based on a little store called L E Riddiford in Thornbury, South Gloucestershire. Clarke visited Thornbury while traveling around the South West, falling in love with the shop layout and the store owner, Mr Len Riddiford. 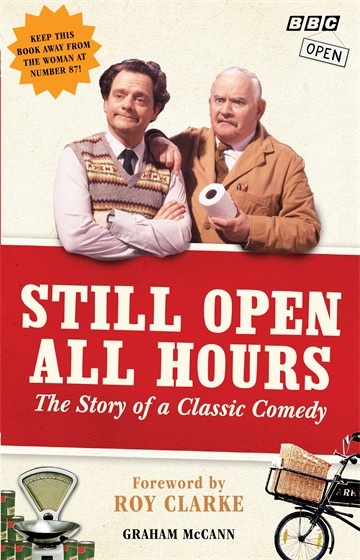 Still Open Hours: The Story of a Classic Comedy is a must read and would be a brilliant Christmas gift for that hard-to-buy-for British comedy in your household. Just a thought…