Text Santa 2014, ITV’s annual charity initiative set up to support UK charities during the Christmas season, kicked off earlier this week on Giving Tuesday and will culminate with a multiple-hour live telecast on Saturday, December 19. Much like its non-commercial counterpart, Red Nose Day, on BBC One, Text Santa  is an on-air appeal that features a number of well-known stars, specially produced show sketches and planned events around the city to encourage the public is to donate money mainly via text donation and profits from merchandise. This years’ efforts is no exception pulling out all the stops by eliciting the efforts of one George Clooney to Downton Abbey. Clooney follows Shirley MacLaine and Paul Giamatti as the next American to grace the upstairs of Downton. 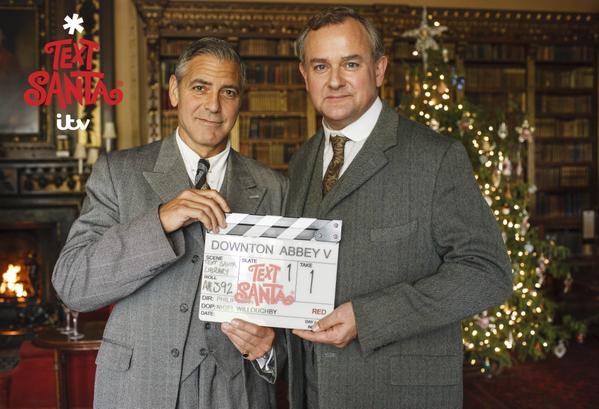 As the story goes, it’s Christmas at Downton and Lord Robert Crawley (Hugh Bonneville) seems to be facing financial ruin once again. Given that Matthew is longer a bailout option, He’s beginning to wonder if the family might be better off without him. Divine intervention in the form of a very special heavenly body gives him a view of what life would really be like around Downton without the Earl of Grantham. Ant & Dec will kick off this year’s Text Santa telethon from London Studios at 1855 on Friday, 19 December on ITV. Here’s a first look at what life might have been like without Robert.