Already being tagged for a possible Best Actor Oscar nomination for his role as Alan Turing in The Imitation Game, Benedict Cumberbatch has landed yet another coveted lead role with the announcement that he will star in Marvel’s forthcoming feature, Doctor Strange. Cumberbatch will play Doctor Stephen Strange, former neurosurgeon turned Sorcerer Supreme, the primary protector of Earth against magical and mystical threats. With a Primetime Emmy Award for Outstanding Lead Actor in a Miniseries or a Movie in 2014 for his brilliant efforts in Sherlock in his pocket, Cumberbatch emerged from a rather stellar group of actors rumored for the title role which included Tom Hardy, Johnny Depp, Jared Leto and, most recently, Joaquin Phoenix. 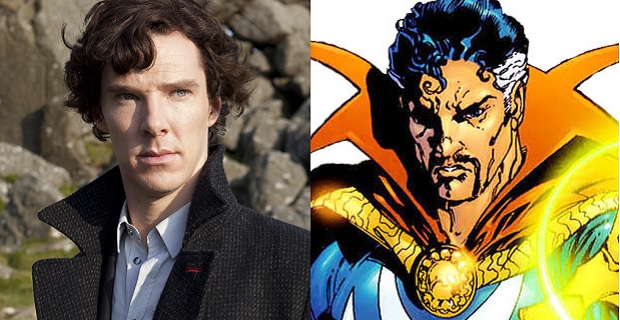 Doctor Strange producer and Marvel movie boss Kevin Feige gave pros to the newest addition to the Marvel universe saying, “Stephen Strange’s story requires an actor capable of great depth and sincerity… In 2016, Benedict will show audiences what makes Doctor Strange such a unique and compelling character.” The best and, perhaps, most welcome news about all of this is that with filming for Doctor Strange set to begin in May 2015, this shouldn’t have an effect on the proposed fourth series of Sherlock, which has been rumored to being filming in January of 2015.

Sherlock co-creators, Steven Moffat and Mark Gatiss have been almost as good as Strange from a magicians standpoint with their ability to fit in filming of the past couple of series of Sherlock‘s given both Cumberbatch’s and fellow Sherlock co-star, Martin Freeman’s crazy busy schedule. Plans are still underway for a Christmas special in 2015 with an additional three episodes to follow in early 2016.