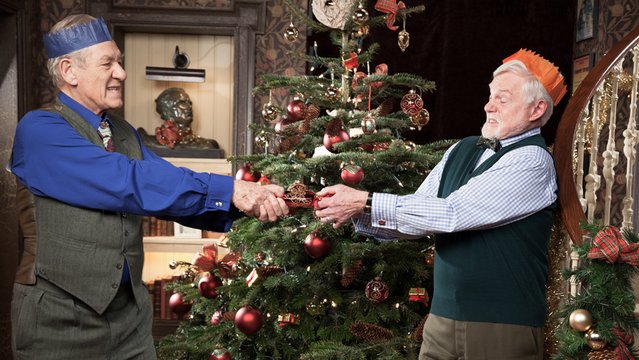 Former bar manager, Stuart Bixby, and over-the-hill actor, Freddie Thornhill, have had a love/hate relationship for almost 50 years…although I’m not sure who loves to hate the other more…

Created by Gary Janetti and starring Ian McKellen, Derek Jacobi, Frances de la Tour, Iwan Rheon, Marcia Warren and Phillip Voss, the Vicious Christmas Special returns to the small central London flat where Freddie (Ian McKellen) and Stuart (Derek Jacobi) have picked each other apart with endless insults for almost a half century. In this year’s Christmas special, which is set to air Christmas night on PBS, immediately following the eagerly-awaited Call the Midwife Christmas Special, is classic Freddie and Stuart as they invite the whole gang over for a traditional Christmas dinner. Sounds pretty harmless, doesn’t it? Let’s see. Ash is cooking, Violet is bringing a new lover and Freddie has an incredibly demanding new acting gig mixed in with a wicked game of Truth or Dare that brings up hidden truths. I don’t see a problem….

And just when you thought there was nothing else under the tree, take a closer look for that ‘saving the best for last’ Christmas present that fans of the series, unfortunately, won’t get to open until 2015. FYI, I peeked…it’s the return of Vicious for a second series on both ITV in the UK and PBS in America. Yes, Virginia, there is a Santa Claus.