With the full acknowledgment and understanding of the growing annual frustration that American fans of Downton Abbey feel knowing that as each new series premieres in the UK almost 5 months prior to it’s U.S. premiere on PBS’ Masterpiece series (September v. January), the silver lining treat to this delay usually occurs in the month of December leading up the American January premiere where much of the cast of the series cross the Atlantic for endless promotional opportunities in support of the series. You can’t put a price tag on free promotion. For the past two years, this flurry of appearances and photo-ops has, no doubt, heavily contributed to the fact that Downton Abbey has the distinction of being the second most-watched program on Super Bowl Sunday the past two years beating out all American commercial network offerings who are competing for audience opposite ‘the big game’.

It also gives fans the opportunity to see the cast not only having fun but also getting their well-deserved props for the show and characters they have brought to life the past 5 years. One can never forget the image of Lord Grantham, himself, with several of his downstairs friends at Downton in tow as he attempts to correct an obvious grammatical oversight on the New York Subway a couple of years ago. It’s nice to see the downstairs inhabitants are allowed to mingle with the upstairs every so often even if they do have to leave the country to be seen in the light of day together. 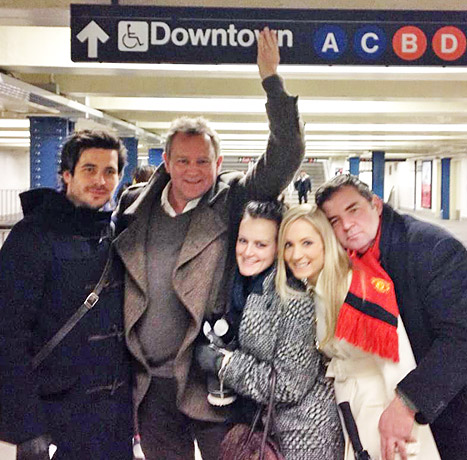 Aside from the non-stop appearances on the likes of The Today Show, Letterman and an assortment of other morning telly shows, the best is always saved for last with their annual appearance at the Hudson Theatre in New York, NY. This past Tuesday, Dec. 9, the cast assembled to about an hour Q&A with fans to talk series 5! Happy viewing and, before you know it, those 23 days between now and January 4, 2015 will be nothing but something to be seen in your rear view mirror.  Cheers.