Time to step aside Disneyland Paris, there’s a new sheriff in town that goes by the name of London Paramount Entertainment Resort. While it’s not quite time to pack your bags for Kent just yet, 2020 is just around the corner. Once you hear about the rides planned for the proposed £2 billion theme park, you’re going to want to be ready at the drop of a hat to head to South East England. With rides, simulators and interactive experiences inspired by the likes of BBC Worldwide mega-properties such as Doctor Who, Sherlock, and Top Gear along with several iconic Paramount properties such as Mission: Impossible, The Godfather and Star Trek, the 900-acre park will also include a 2,000 seat amphitheatre, 5,000 hotel rooms and create up to 27,000 jobs. 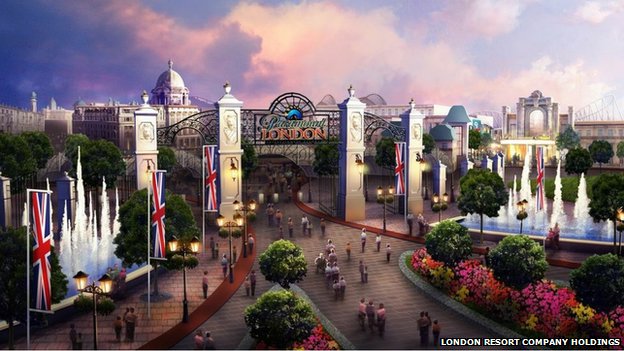 While none of the BBC series are locks as of yet to be featured in the park, you have to believe Doctor Who will be one of them. After all, he just made the streets of London safe by defeating the Cybermen, so saving a theme park from alien destruction shouldn’t be that big of a challenge. There is a lot of competition out there from a theme park standpoint what with Disney just now beginning to get information out as to how Star Wars fits into the global Disneyland theme park plan, after buying LucasFilms a couple of years ago. And, Universal just recently opened the Wizardry World of Harry Potter attraction at its Universal Orlando Resort, complete with a fully functioning Diagon Alley.

Cost aside, it’s a bit surprising that it took this long to capitalize on the gargantuan audiences each of these BBC properties has enjoyed across the globe. I mean, we’re talking Doctor Who, Sherlock and Top Gear here. Kent is only an hour or so from London so it may be wise to have a packed backpack ready to go at a moment’s notice…you never know when The Doctor might need a new companion!