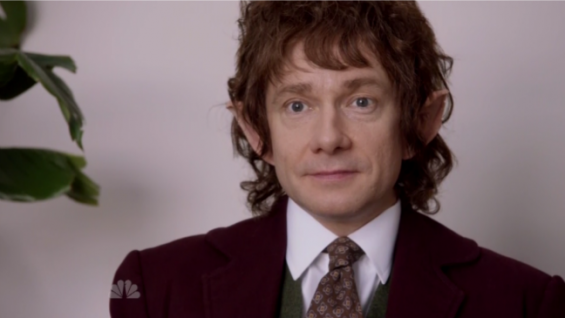 When Martin Freeman (The Office, Hobbit, Sherlock, Fargo) stepped onto the 30 Rock stage to host Saturday Night Live this past weekend, it almost reminded me of my university days when SNL was so good, you didn’t even think about going out on Saturday night until it was over. Those were the days of John Belushi, Dan Ackroyd, Jane Curtin, Gilda Radner, Chevy Chase, etc. This was the definition of must-see-TV.

Not so much in recent years. Until Saturday, when the Sherlock star was center stage at NBC’s Studio 8H for what could really prove to be like an SNL sketch from days past.

“The brave Hobbit, Bilbo Baggins, now works at a paper company,” Bilbo (Freeman) said. “And I drive a Jetta.”

The sight of Gollum finding his stapler in jello was priceless along with even the minute detail of substituting BBC with JRR added the perfect touch not to mention Gandalf as the self-proclaimed “lord of the reams”, David Brent.