The UK Christmas Day to New Year’s Day tradition of great telly just gets better and better with every passing year. Besides the usual obligatory specials from Eastenders, Coronation Street and Doctor Who to look forward to, in recent years those lucky ones to receive the BBC and ITV signal have been treated to specials from Call the Midwife, Downton Abbey and Miranda to name a few. Each year tops the last and 2014 is no exception. One of the centerpiece offerings this year will be on on Thursday, 1 January with the television adaptation of Roald Dahl’s classic children’s novel, Esio Trot. Adapted by Richard Curtis (Blackadder, Love Actually) and his Vicar of Dibley co-writer, Paul Mayhew-Archer, Esio Trot stars Dustin Hoffman and Dame Judi Dench. 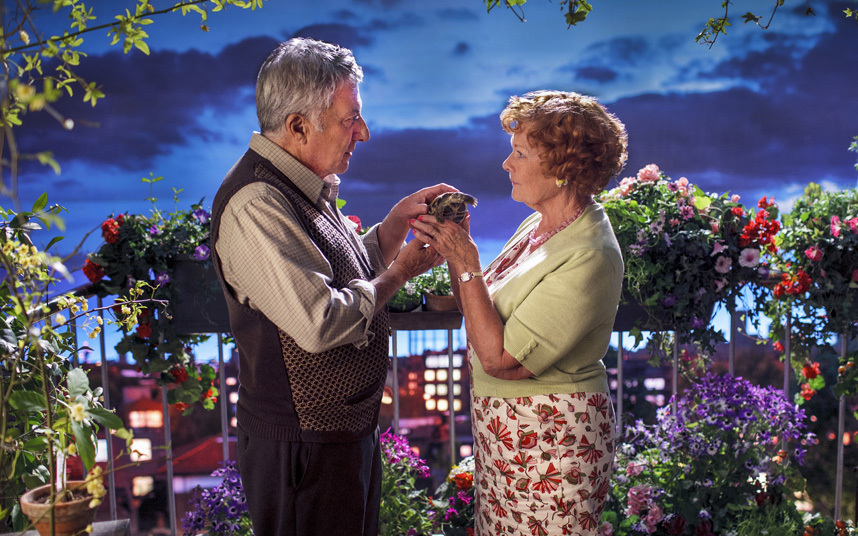 Hoffman stars as Mr. Hoppy, a shy old man who lives by himself in an apartment building, passing the time tending to his balcony garden. He is secretly in love with Mrs. Silver, his downstairs neighbor, played by Judi Dench. Their ‘world together’ consists of polite conversation with no hint as to how he feels. Unfortunately, for Mr. Hoppy, Mrs. Silver has one love in her life…her tortoise, Alfie. When she expresses to Mr. Hoppy that she wished Alfie would grow into a larger, more dignified tortoise, Mr. Hoppy devises a plan to win the affection of Mrs. Silver. He leads Mrs. Silver to believe he knows of a way to magically make a tortoise grow bigger. It’s simple. All she has to do is whisper the following words into Alfie’s ear three times daily (Think playing a Beatles record backwards and you’ll get the idea).

This really charming story, brought to life by writers, Richard Curtis and Paul Mayhew-Archer, and the stellar talents of Dustin Hoffman and Dame Judi Dench, was first conceived when, according to Rachel White of the Roald Dahl Museum, the author hit upon the idea when he visited the London flat of his eldest daughter Tessa in the 1970s, and watched as she chatted to neighbour Mrs Shrimpton and her pet tortoise. In a speech given to students at Wright State University in 1978, Dahl said: ‘I stood leaning over the balcony staring at Mrs Shrimpton’s tortoise in his box. And quite automatically my mind began to wiggle around with a story about this tortoise. The only point in telling you this is to try to illustrate how the mind of a writer of fantasy works. It is eager to embrace what is absurd.’

Roald Dahl’s Esio Trot transmits Thursday, 1 January at 6:30p on BBC One. It just might be time to book that New Year’s flight to the UK for this one…