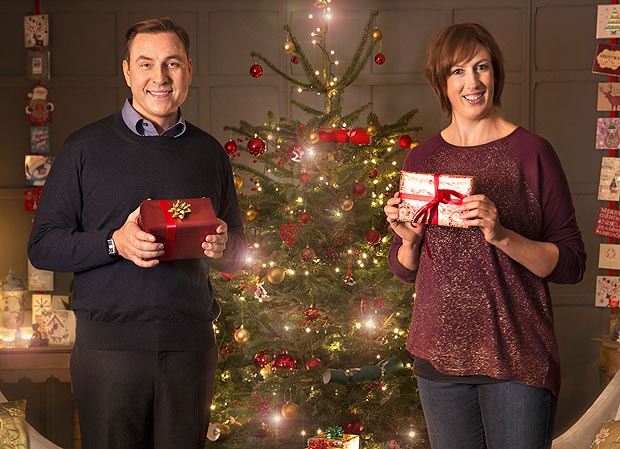 Given the timing this week whereby telly viewers in the UK will soon be, sadly, preparing themselves to say goodbye on Christmas Day (and New Years Day) to the Miranda Miranda Hart but, happily, saying hello to the Call the Midwife Miranda Hart in Poplar, she and fellow Sport Relief BFF, David Walliams, took time out from their busy schedules to share a bit of acting 101 with Miranda Hart’s Christmas Acting Masterclass which should give everyone a bit of a leg up on how to react to that special gift from your Aunt Martha come Thursday morning. From socks, to novelty items, to…more socks, Miranda shares a series of brilliant acting exercises on how to act (and react) when receiving a disappointing Christmas gift.

Both David Walliams and Miranda Hart have been pretty much Christmas telly staples the last several years in the UK. 2014 marks the third adaptation of one of David’s children’s books with the premiere of The Boy in the Dress on Boxing Day. In previous years, viewers were treated to wonderful adaptations of Mr. Stink and Gangsta Granny. In addition to Walliams, this years special will star Billy Kennedy in the title role, Meera Syal (Goodness Gracious Me), Tim McInnerny (Blackadder), James Buckley (InBetweeners), Jennifer Saunders (Absolutely Fabulous) and Kate Moss in a cameo role. Miranda Hart will be seen on Christmas Day in the first of two final episodes of her brilliant comedy series, Miranda, and also as Chummy in the Call the Midwife Christmas Special airing on both BBC One and PBS.