From a drama standpoint, 2014 is going out in style just like it came in. Since last January, British telly fans have feasted on the likes of Downton Abbey, Sherlock, Call the Midwife, Mr. Selfridge, Broadchurch, Prey, Endeavour, Lewis, Last Tango in Halifax and Scott & Bailey…to name a few. Before we all begin to lean forward to 2015, there’s still one more waiting in the wings set to air in 2014 before we get ahead of ourselves. Beginning Monday,29 December and concluding ing on New Years’s Eve, Mapp and Lucia is a brilliant way to put a cap on 2014 and get us ready for 2015. Set in 1930, EF Benson’s Mapp and Lucia novels tell the tales of the extraordinarily quaint Queen Anne village of Tilling.

Starring Miranda Richardson, Anna Chancellor, Steve Pemberton and Mark Gatiss, Mapp and Lucia is a brilliant  parody of snobbery and pretensions of the upper-middle-classes in 1930s small-town Britain. It’s Downton Abbey on steroids. Filmed earlier this year in and around the literary East Sussex town of Rye, which is just north of Hastings where Benson lived, it is the embodiment of the fictional picturesque seaside town of Tilling…without the seaside, obviously. 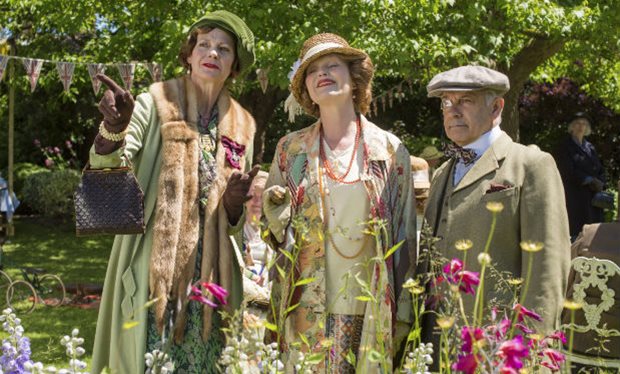 Tilling’s eccentric inhabitants exist in a world overflowing with gossip, faddishness and petty one-upmanship. From her centrally located house, Mallards, Miss Elizabeth Mapp reigns supreme over them all. Until, that is, the arrival of Mrs Emmeline ‘Lucia’ Lucas. With her passion for music, art and high culture of all kinds, Lucia is quite an addition to Tilling’s social hierarchy scene. It’s not long before Mapp is indulging in all kinds of foul plots to undermine her accomplished tenant.

“Remarkably, Rye is not that different from Mapp and Lucia, and the locals would admit that themselves,” explains series producer, Susie Liggat. “It’s a bohemian and eccentric place that’s very proud of its literary connections.”  The idea of filming Mapp and Lucia in Rye was not lost on the cast which reads more like a Who’s Who in British acting list.  Taking time out from their battle for social glory, Anna Chancellor, who plays Lucia, and Miranda Richardson, who plays Mapp, fell in love with Rye. “It’s extraordinary to actually film within the tiny little world that Benson wrote about. Everything that obsessed him is all here for us. It’s like being in a ready-made studio. And it’s so pretty.”  Says Miranda Richardson, “It was delightful to be able to walk around and say, ‘Oh my goodness, that’s where that is’. Benson must have meant this!”

The history of Rye was not lost on Steve Pemberton, who adapted the books for the small screen and plays Georgie Pillson, Lucia’s devoted best friend, either. “A lot of literary characters and figures have lived in Rye over the years. It’s got a very artsy and creative feel about it”.

Mapp and Lucia premieres Monday, 29 December and runs over three consecutive nights on BBC One. American viewers can look forward to seeing the series in 2015 as part of PBS’ Masterpiece series.