With the 5th season series premiere of Downton Abbey a mere week away, America is preparing to let all phone calls go to voicemail when PBS’ Masterpiece series returns to Downton beginning at 9:00p ET/8:00p CT on Sunday, January 4, 2015. Since it’s been almost a year since we last visited the Crawleys, it’s time for a bit of catch-up by looking back and looking forward. Our look back begins with the obvious and the ‘special’ relationship that exists between Isobel Crawley and the Dowager Countess and wondering just how much better this will get during series 5.

Isobel, you might recall, is (or was) Matthew’s mother. As a member of the ‘professional middle class’, she embodies an entirely different set of values than her more traditional peers at Downton Abbey, Violet and Cora, and isn’t afraid to take on anyone at Downton. Admittedly, she does go a bit overboard from time to time, regularly looking to pick a fight with Violet. Violet is, well, Violet. FYI, my money is on the Dowager Countess as she goes toe to toe with Isobel is series 5. 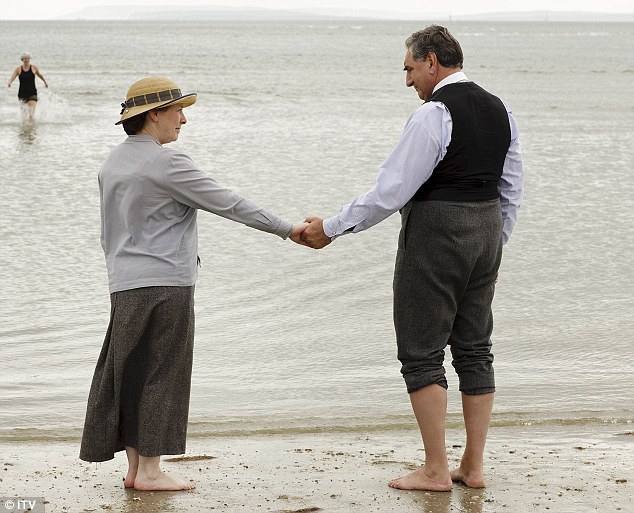 More importantly, when we last left Downton, it looked as if there might be something about to happen between Mr. Carson and Mrs. Hughes. Personally, I’m growing a bit tired of waiting for Lady Mary to make her mind up as to whether Tony Gillingham has won the Lady Mary Sweepstakes or not so this storyline has promise. Our brief look forward wonders if there might be a bit of romance in the air for Mr. Carson and Mrs. Hughes? Here, the cast weighs in on their thoughts and hopes for the two downstairs mainstays in series 5.

Wondering how you are going to make it for a full 7 days before the return of Downton? Tune in to PBS tonight (Sunday) at 8:00p ET/7:00p CT for the premiere of The Great British Baking Show. Mary Berry and Paul Hollywood serve as judges with Sue Perkins and Mel Giedroyc serving as presenters for what has become the most-watched non-sporting event series in the UK for 2014. Twelve contestants compete over the next 10 weeks for the title of ‘UK’s Best Amateur British Baker’. 2015 is going to be a great year for British drama and comedy. We hope you come along for the ride….Cheers.