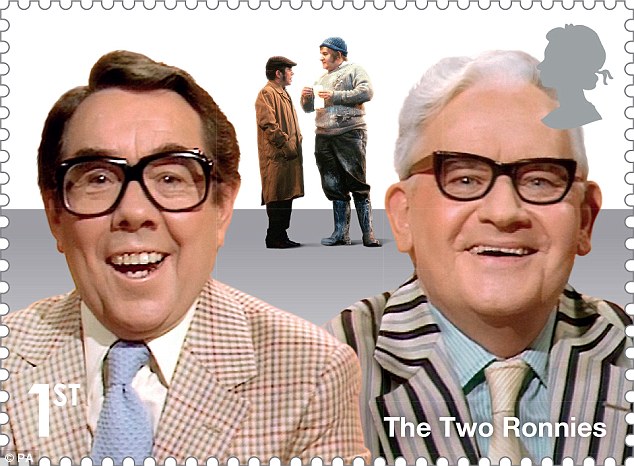 In the age of more and more communication via texts, email and FaceTime, the archaic practice of sending snail mail may just get a bit more fun beginning 1 April 2015. Royal Mail has just released the first images of a new set of stamps celebrating Britain’s comedy greats, including The Two Ronnies, Ronnie Corbett and Ronnie Barker. Other iconic comedians from stage and screen will also be included in the set to be released this Spring. The Two Ronnies stamp will include a picture of arguably their most famous work, the ‘Four Candles’ sketch.

In addition to the commemorative British comedy stamps, Royal Mail announced it would be releasing stamps to celebrate the engineering of bridges, highlight British inventions (including Tim Berners-Lee and the World Wide Web) and a Rugby-themed stamps set for a September 2015 launch to mark the UK’s hosting of the Rugby World Cup. Much like Dame Maggie Smith and Dame Judi Dench, Royal Mail is not going to be sitting around in 2015 with planned releases to celebrate bees and feature a religious-themed Christmas. The bicentenary of The Battle of Waterloo and the 75th anniversary of the The Battle of Britain will also be featured on stamps released this summer.

With Royal Mail receiving literally hundreds of requests each year for its special stamp run, it’s up to The Queen to approve all stamp designs before they are printed. The initial release in the new run will be 6 January 2015 with a set celebrating the 150th anniversary of the publication of Lewis Carroll’s Alice in Wonderland.

Time to think about sending a card through the mail again before you hit send on that Birthday e-card you just created. It will definitely be more fun…..