Leave it to CNET to find the perfect way for British telly fans to end 2014 and dive head first into 2015 with the Doctor Who theme performed by an all-robot orchestra! Well, almost all-robots….there are a few humans allowed in the band this year. As part of this year’s Royal Institution Christmas Lectures on UK TV channel BBC 4, 15 robotic musicians and a few humans to teamed up for an absolutely brilliant version of the iconic series’ theme song. For those that may be a bit unfamiliar with the Royal Institution Christmas Lectures, they were started by the British scientist Michael Faraday in 1825, and are broadcast in the UK on television annually over the holidays. Every year, the theme of the lecture changes and they are presented by experts in their field.

With this years theme entitled “Sparks will fly: How to hack your home,” presented by Professor Danielle George, an electrical engineer from the University of Manchester, what better way to get your point across and celebrate the holidays at the same time than with some talented robots and a few humans paying tribute to Doctor Who. It’s pretty much the definition of a perfect match given the Time Lord’s perpetual run-ins with mechanical and robot-like villains over the last several hundred years. It’s also proof positive that not all robots want to destroy…or, exterminate, as the case may be. 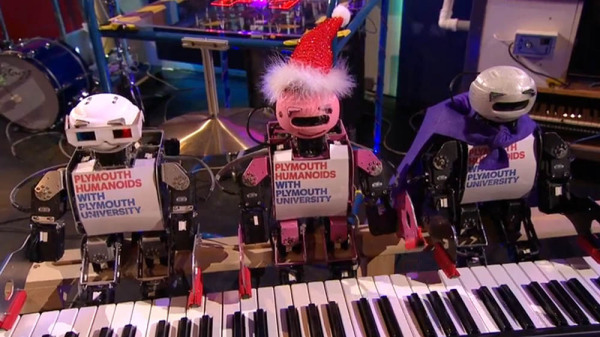 “Inspired by the Royal Institution’s very own Michael Faraday, Prof. Danielle George attempts to use simple motors to construct the world’s greatest robot orchestra,” according to the Royal Institution’s website. “In this lecture, Danielle will explain how these robotic and motor-driven appliances work and show how they can adapted to help you kick start a technological revolution.”

The Royal Institution’s website also has numerous science projects you can make yourself with “stuff”. So, what are you waiting for? We all have “stuff”, don’t we?