Panicked at the thought you’re not ready for tonight’s series 5 premiere of Downton Abbey on PBS? Not to worry. The great folks over at Masterpiece have thought of everything…again! 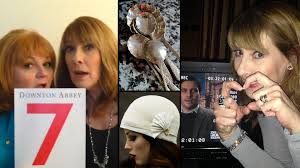 The one thing you have to do, however, is commit to drop everything and get ready for the Downton Abbey Season 5 premiere with these 14 Downton Must-Dos! Click on the links below and catch up on all the will-they-won’t-they, did-he or didn’t-he plots; immerse yourself in Downton Abbey style; and join Downton stars as they count down to the new season, premiering tonight at t 9pm ET/8pm CT on PBS’ Masterpiece! Are you ready?

3. Count down to the Season 5 premiere with Downton Abbey‘s stars on Twitter.

5. Meet the racy cougar who fancies Jimmy, the art historian with an objectionable cut to his jib and more new characters of Downton Abbey Season 5!

6. See what happened when the cast took over Instagram and New York!

7. Get the manse scrubbed and polished, inspired by Downton Abbey on Pinterest.

9. Catch up with Downton Abbey‘s icy and eligible Lady Mary.

12. Decide: Is Bates a murderer? A double murderer?

13. Top off your Downton Abbey style with a jaunty cloche!

14. Find out which Downton Abbey bachelor is right for you.

Well, that was easy. Now all you have to do is pick out that perfect recipe from The Unofficial Downton Abbey Cookbook and make Mrs. Patmore proud! Don’t forget to email us at tellyspotting@kera.org for your chance at winning a copy of the book. Deadline is Sunday, January 11 at 11:59pm! This is the day you’ve been waiting for since February 22, 2014! Cheers!