This is getting to be a bit like being a kid in a candy story. The first weekend/full week of 2015 has brought telly viewers on both sides of the pond some brilliant drama. Last night, in particular, was drama gold no matter which side of the Atlantic you found yourself on. West of the Atlantic saw the return of Downton Abbey on PBS in the States while on the same night in the UK, Michael Kitchen returned in the first of three new episodes of Foyle’s War on ITV. Fortunately, public television fans of Christopher Foyle will only have a few months to wait as new episodes will be available for broadcast in the America beginning in May 2015. Yes, May sounds like a long way off but you’ll have a lot to occupy your time with until then with the continuation of the new season of Downton Abbey, the return of Call the Midwife, Mr. Selfridge and Father Brown, not to mention the premiere of Grantchester and Wolf Hall. 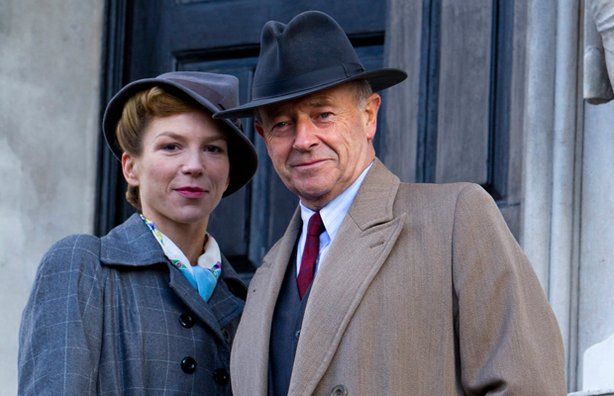 Series creator/writer Anthony Horowitz, once again, weaves a amazing set of stories that features the quiet, methodical and often underestimated Foyle with Honeysuckle Weeks returning as Foyle’s driver Samantha Stewart (now, Wainwright), Tim McMullan as MI5 Senior Member, Arthur Valentine, and Ellie Haddington (The Cafe) as MI5 Special Operations Executive, Hilda Pierce. Aside from the stellar performances that have been the mainstay of Foyle’s War from its beginning in 2002, the historical accuracy continues to be impeccable with a brilliant attention to detail of the events of a post-World War II world with Foyle now working for MI5, navigating the world of Cold-war espionage.

Sunday night saw Michael Kitchen return to the role of Christopher Foyle, senior intelligence officer for MI5 in “High Castle”, the first of three films. Set in 1946, Foyle is drawn into the world of corrupt Nazi businessmen when a university professor is found murdered in a London park. When it transpires the victim was working as a translator in Nuremberg, the detective realises there are powerful people trying to conceal secrets from the Second World War. Meanwhile, Sam volunteers for a risky undercover job, despite being pregnant. Guest stars include John Mahoney (Frasier), Jaime Winstone (Mad Dogs) and Nigel Lindsay (Four Lions). Keep an eye out for Downton Abbey‘s Jeremy Swift also.

The final two episodes in the new series, “Trespass” and “Elise” are vintage Horowitz and classic Kitchen. “Trespass” will transmit in the UK on Sunday, 11 January with the final episode, “Elise” set for a Sunday, 18 January premiere on ITV. Public television viewers in the U.S. won’t have to stay off the Internets too long to avoid spoilers as the newest set will premiere in May 2015. In the meantime, enjoy a bit of Downton Abbey, etc. until then.