Our collective kid-in-a-candy-store/cup-runneth-over drama days continue with the news that the Rupert Penry-Jones series, Whitechapel, will find it’s way to public television in America in the not-too-distant future. Produced by Carnival Films, who also did that little series you may have heard of, Downton Abbey, Whitechapel follows detectives in the Whitechapel district of London as they deal with a series of murders that replicate historical crimes.

Series one deals with a modern day Jack the Ripper copycat killer with series two centered around the Kray twins, who headed organized crime in the London’s East End during the 50’s and 60’s. While on the surface, this may seem like a one-trick pony, the production is stellar as it creates a perfect balance of present day along with the original crime to give viewers a better understanding as to what DI Joseph Chandler and team are going through trying to solve each case. Rupert Penry-Jones (Spooks, Persuasion, Silk) as the newly promoted/somewhat OCD head of the detective unit, DI Joseph Chandler, the great Phil Davis (Being Human, Silk, Sherlock) as ‘old-school’ cop, DS Miles, and Steve Pemberton (League of Gentleman, Mapp and Lucia) as ‘Ripperologist’, Edward Buchan, head the equally as brilliant cast. 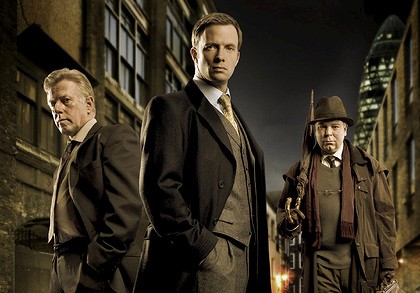 When it first premiered in 2009, ITV Director of Drama Laura Mackie summed the series up perfectly by saying, “Whitechapel is a very modern take on the detective genre which combines the Victorian intrigue of the original case with the atmospheric backdrop of a contemporary East End of London. This is not simply about bloodthirstily recreating the Ripper murders, but rather focusing on the three main characters at the heart of the story and the black humour that binds the team together.”

If you haven’t seen Whitechapel, here’s a quick crash course in Whitechapel 101 from another great British effort, Crime Connections, just to give you a better understanding as to what you are in for in 2015. It’s a bit strong for the squeamish but well worth the telly time…