With two semi-cryptic yet amazingly simple tweets by the BBC and co-creator/writer, Mark Gatiss earlier this week, the Earth moved and the heavens opened up with the knowledge that filming was set to begin on the new series of Sherlock starring Benedict Cumberbatch and Martin Freeman. According to the Independent, shortly afterwards, Sherlock’s cast were spotted arriving at Bristol music venue Colston Hall and the series co-creator/writer Gatiss posted the picture below of a clapperboard, complete with a moustached face and a caption reading “Element-hairy, my dear Watson!”, an obvious reference to an earlier pic of Martin Freeman’s John Watson character looking quite like the Victorian England gentleman with moustache and bowler hat. Thank goodness Twitter only allows 140 characters! 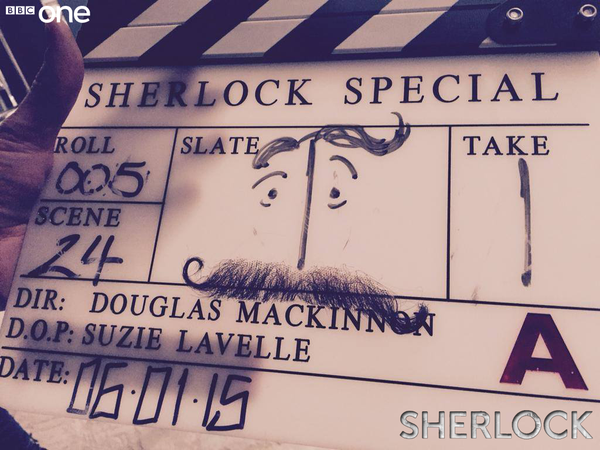 The scenes currently being shot are for the show’s Christmas special, which will air in December 2015. With no word as of yet regarding production plans for the remaining episodes in the new series that will, most likely, see 2016 as a transmission date, the Sherlock nation is breathing once again comforted with the knowledge that while it may be a full year before the world’s greatest consulting detective returns to telly, the adventure has begun.

Of course, this will open up the floodgate of speculation as to what’s in store for Sherlock, et. al. Will Moriarty be back? Will Mary Morstan (Amanda Abbington) be long for this world? While it has been awhile, how can you forget that perfectly brilliant ending to series 3 with Moriarty’s face on every screen imaginable and the unforgettable words, “Did you miss me?”