Well, America has begun breathing again with the return of Downton Abbey this past Sunday. While most of the forward promotion would lead you to believe that there was an wave of change getting ready to overtake Downton with Mr. Carson running screaming out of the front of the Abbey, the first episode was pretty much business as usual for the Crawley family. Early on, Lord Grantham (or, Lord Donk) laments the government desire to destroy ‘people like us’ and Thomas was being…well, Thomas, going back and forth in the eyes of Lady Cora from his master manipulator ways with Baxter to his new-found heroic stature by saving Lady Edith before the flames engulfed her bedroom. 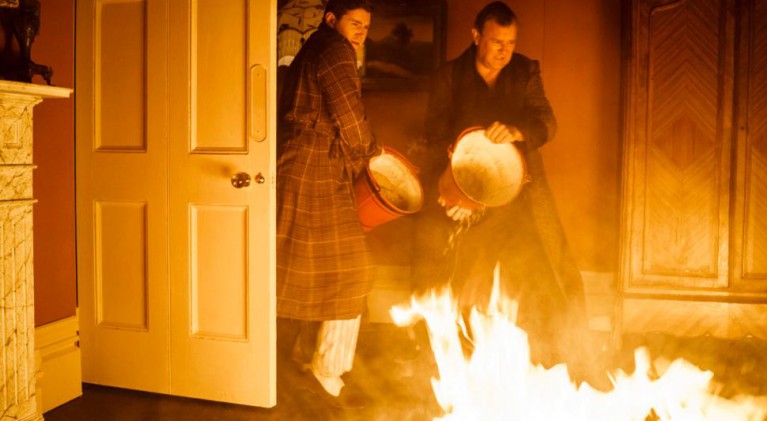 Speaking of Lady Edith, she’s pretty much already at the top of her game this season, still simultaneously as happy and as sad as ever after not only getting the opportunity to see (then leave) her daughter but almost burning down the house to top the night off. Greatest line from episode 1? Has to be Lady Mary telling everyone, “Lady Edith chose to set fire to her room, but we’re fine.” While Lord Grantham continues to fret over the thought that ‘landed aristocracy’ might become a thing of the past with the Labour Party on the rise, Lady Mary begins to ‘play the field’ and toy with Lord Gillingham and maybe even Charles Blake. Like Baldrick, Lord Gillingham has a cunning plan. Mary’s response? “If Papa were here, he’d hit you on the nose.”

For the rest of episode one, the Dowager Countess and Isobel are at it again and Sarah Bunting returns only to, once again, make Tom resurrect the notion that he really doesn’t belong at Downton. Oh, yeah. Then there is Mr. Molesley being Mr. Molesley trying to woo Baxter by putting something that resembled black shoe polish in his hair.

Thankfully, we can all put episode 1 behind us and dive head first in to 1924 and episode 2 which airs on PBS tonight  at 9:00p ET/8:00p CT. Carson, however, isn’t quite so keen on the idea of Downton catching up with the times they live in…