Written by the son of a former Archbishop of Canterbury, Grantchester makes its way to PBS after a success first series run on ITV in the UK this past Autumn.  The vicar-turned-detective adaptation is set in 1950’s Cambridgeshire and starring James Norton (Death Comes to Pemberley, Happy Valley) and Robson Green (Touching Evil, Reckless), takes inspiration from a book by James Runcie, head of literature at the Southbank Centre in London, whose father Robert was Archbishop of Canterbury in the 1980s. The six-part series begins this coming Sunday on PBS at 10:00p ET/9:00p CT following that little series called Downton Abbey. 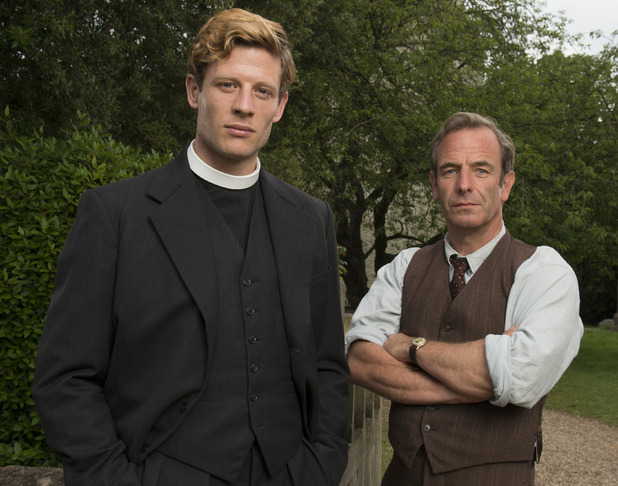 Grantchester is based on “Sidney Chambers And The Shadow Of Death”, with a script by former EastEnders writer Daisy Coulam and the investigation of the suspicious death of one of the church’s town parishioners.

Eerily reminiscent of a much grittier version of the BBC series, Father Brown, Grantchester focuses on the crime-solving relationship between a charismatic clergyman Sidney Chambers (James Norton), whose intuitive techniques of coaxing information from witnesses and suspects clashes a bit with an over-worked Police Inspector, Geordie Keating, played by Robson Green, and his more methodical approach to policing. Here, both Norton and Green discuss their ‘special’ crime-solving partnership…

UK fans of Grantchester can go to sleep tonight with the knowledge that the series has been renewed for a second series with stories to be adapted from Runcie’s second Grantchester Mysteries novel, “Sidney Chambers and the Perils of the Night”.