While we are still some 11 months away from the long-awaited 2015 Sherlock Christmas one-off special, anytime we can get an opportunity to post something ‘Sherlock’ the better. It passes the time and helps a bit to reduce the separation anxiety a bit. As you can imagine, a series as complex as Sherlock can unlock all kinds of inner-artistic ability. A couple of years ago, we’ve ran across a lovely piece from the Consulting Piskies based on Hopper’s Nighthawk iconic painting. 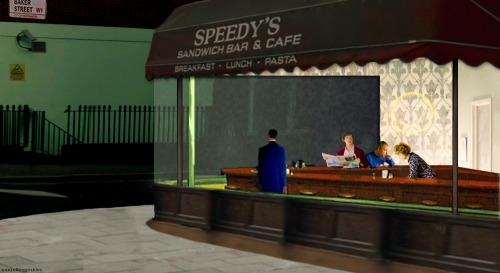 Then, there was this equally amazing video from artist, Stephen Quick, and his ‘speed painting’ of Benedict Cumberbatch’s Sherlock in just over 5 minutes.

Not wanting to be left behind or left out of any of our mind palaces is Dr. John Watson. Artist Anne Bardsley has produced a brilliant time-lapse video of her latest sketch, Sherlock star Martin Freeman as Dr John Watson. The extra added touch is that Bardsley has created the likeness on a page taken from the Sir Arthur Conan Doyle original story, A Study In Scarlet, which was renamed “A Study in Pink” and was the first episode in the BBC/PBS drama series co-created and written by Steven Moffat and Mark Gatiss and starring Benedict Cumberbatch and Martin Freeman. You can check out some of Bardsley’s other artistic creations here.

Now, don’t you feel just a bit better knowing that December 2015 is just a wee bit closer now than when you starting watching these videos?