I know, we’ve written (and, probably, overwritten) how you can tell when a series such as Downton Abbey instantly becomes a part of pop-culture. If it makes it to the mind palaces of such icons as Saturday Night Live  or Jimmy Fallon, whose Downton Sixby spoofs were priceless, then you know you have something. With Downton Abbey, there are even rumors this year of folks in charge of the Academy Awards being a bit nervous of Britain’s most successful drama of all-time sucking audience from this years Oscar telecast given the lack of ‘mainstream’ movies up for awards. You’ll remember that DA has finished second in audience behind the Academy Awards broadcast for the past two years. Ok, admittedly millions behind first place in overall audience numbers but, still, Downton Abbey can proudly lay claim to being the second most-watched program on television that evening for two years running! All that aside, now comes the ultimate in the ‘we have arrived as a pop-culture series’ tribute with the forthcoming broadcast from PBS’ award-winning children’s series, Arthur, based on the books of the same name written and illustrated by Marc Brown. 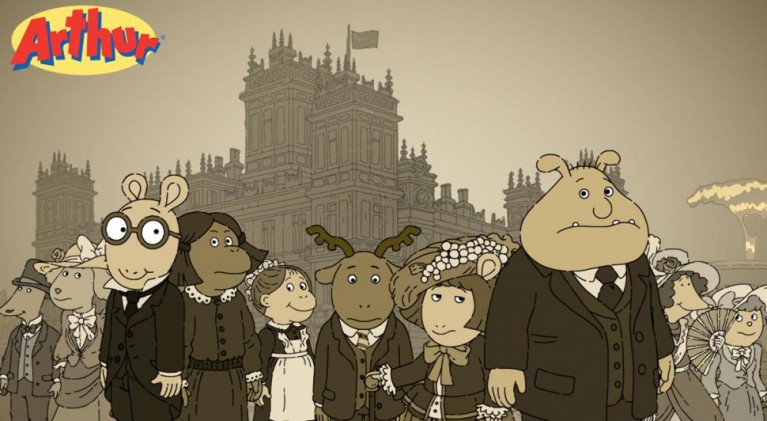 In an all-new, Downton Abbey-inspired episode of Arthur, premiering January 26 on PBS KIDS, Muffy finds herself absolutely devastated when she learns her great-great grandmother, Mary Alice, wasn’t royalty at all. She was a downstairs resident,  a ladies maid. However, reading through Mary Alice’s diary, Muffy discovers a more interesting story about her family’s history and learns how to appreciate her ancestry.