Ok, maybe not B.A.R.S. (before Antiques Roadshow) but definitely before the the likes of Bargain Hunt, Flog It! and Cash in the Attic, was Lovejoy which starred Ian McShane (Deadwood) as the less than honorable yet inexplicably likeable rogue antique dealer, Lovejoy. For 71 episodes over 6 series from 1986 to 1994, Lovejoy’s keen detective eye for antiques gave him the necessary tools he needed to distinguish genuine antiques from clever fakes or forgeries and to always be on the lookout for a ‘find’. 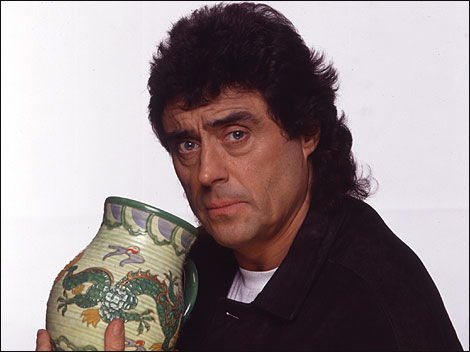 Much like the the forthcoming re-make of the mid-70’s Robin Ellis classic, Poldark, Lovejoy may be in line for a similar re-do thanks to Life on Mars and Hustle creator, Tony Jordan. Based on the original Lovejoy novels by Jonathan Gash (John Grant), a source told Radio Times that a possible series re-make is in “…the very early days“. Unlike Ellis, who starred as Ross Poldark in the original series of Poldark and can be seen in the forthcoming remake that stars Aidan Turner, McShane thought it unlikely that he would ever reprise his role in the future.

Phyllis Logan, McShane’s co-star who helped him with his ‘deals’ and can now be seen as Mrs. Hughes in Downton Abbey, has a different take on the possibility of returning to her original Lovejoy role. She told Radio Times that she’d return to the show “in a heartbeat“, adding, “I loved it. It’s almost my favourite job ever.”

Don’t know about you, but I would totally be up for a 21st century Lovejoy makeover. How about you?