After 25+ years of bringing Agatha Christie’s dapper Belgian detective to life, Sir David Suchet will remove the trademark Hercule Poirot hat and moustache in favor of another hat, handbag, dress and petticoat to play Lady Bracknell in a new West End production of The Importance Of Being Earnest, Oscar Wilde’s satire of Victorian high society.

Considered to be Wilde’s most renowned comedy, ‘Earnest‘ tells the story of two bachelors, John ‘Jack’ Worthing and Algernon ‘Algy’ Moncrieff, who create alter egos named Ernest to escape their tiresome lives. They attempt to win the hearts of two women who, conveniently, claim to only love men called Ernest. The pair struggle to keep up with their own stories and become tangled in a tale of deception, disguise and misadventure. The complicated plot completely ridicules Victorian sensibilities with some of the best loved, and indeed bizarre, characters to be found on the modern stage. 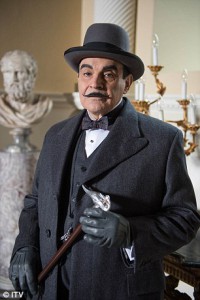 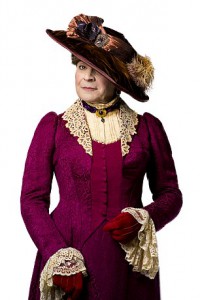 Sir David will certainly have big shoes to fill given the fact that previous actors that have portrayed Lady Bracknell on either the live stage or big screen include Penelope Keith, Dame Judi Dench, Geoffrey Rush, Brian Bedford and Edith Evans. Eager to take on the challenge, Suchet said he intended to play her ‘straight’. ‘Please god that I don’t become a pantomime dame – that would ruin the play. I’m going to explore my feminine side, though she is quite a masculine character. She will be one hundred per cent woman,’ Suchet insisted.

Suchet further explained that he would avoid camp jokes or ’falsetto voices or anything like that’ and added, ‘I will use my upper register. The wit expressed has got to get the audience – not the way I sound.’

While American audiences will continue to enjoy Suchet’s lifetime commitment to Agatha Christie’s Hercule Poirot on public television stations, Oscar Wilde’s The Importance of Being Earnest, which co-stars Michele Dotrice, Emily Barber and Imogen Doel, will be at the Vaudeville Theatre, London, from June 24 following a six-week UK tour.