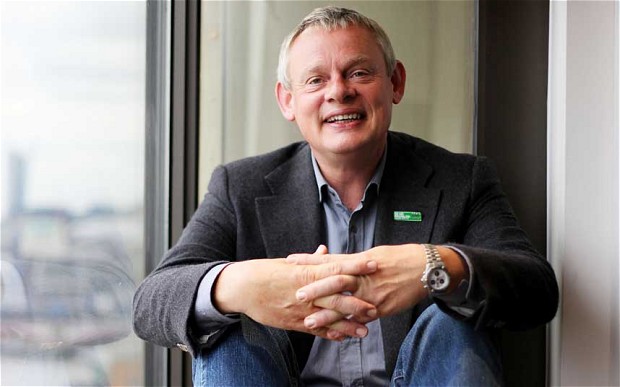 It seemed harmless enough. An innocent Q&A with Martin Clunes that appeared in The Telegraph on Friday seemed quite harmless on the surface. A nice bit about how he spends his rare ‘off-time’ (currently watching BAFTA-nominated films with wife, Philippa, who is not only on the BAFTA jury but also doubles as producer of Doc Martin), references to his four dogs, a Labrador, a Jack Russell, a Jackahuahua (a Jack Russell-Chihuahua cross) and an eight-month-old cocker spaniel, detailed weekend farm-maintenance chores, a bit about his horses, including riding his Clydesdales, and, after dinner, a good ‘ole game of horse monopoly. Then, buried deep within the Q&A was this bit of tidbit gold from the man himself…

“Even when we start filming the next series of Doc Martin down in Cornwall in a few weeks, I’ll be back on Friday night by about 8.30pm.”

At long last. Confirmation of not only the fact that there will be more Doc Martin episodes, but that filming on the next series is set to begin soon! So, pack your bags and head to Port Isaac in the not-too-distant future. Everyone’s favorite curmudgeonly GP is headed to telly in the UK and America soon!

In the meantime, the interview continued but it, admittedly, it was really hard for us to focus on anything else at this point. But, we put on our big boy pants and did our best to get through it. From a telly standpoint, Clunes is a big fan of David Tennant’s Broadchurch, partly because it’s set in Dorset where he lives. His newest small screen adventure, Arthur and George, which is based on the Julian Barnes novel about Sir Arthur Conan Doyle, is actually taking over in Broadchurch’s Monday night slot in March 2015. Clunes is also President of The British Horse Society and an ardent supporter of Hoof, the British Equestrian Federation’s participation program, which aims to get more people riding.

Never mind that, did you catch that there are new Doc Martin episodes on the telly horizon?