Ok, it’s not set in the 21st century and it’s not Benedict Cumberbatch but it is 1947, it is Sir Ian McKellen and it definitely is Sherlock! Given the fact that the Sherlock-Nation will be without a new Benedict Cumberbatch episode for roughly another 11 months, we all are in desperate need of a periodic ‘Sherlock Holmes’ image every once in awhile no matter who Sherlock is and what year it is set. Fortunately, in this particular case, we are talking about the one and only Sir Ian McKellen. The one Sherlock Holmes feature that is set to come out in the not-too-distant future is the Bill Condon directed, Mr. Holmes, which stars Sir Ian McKellen as a 93-year-old version of the world’s most famous consulting detective who now lives a quiet life keeping bees. 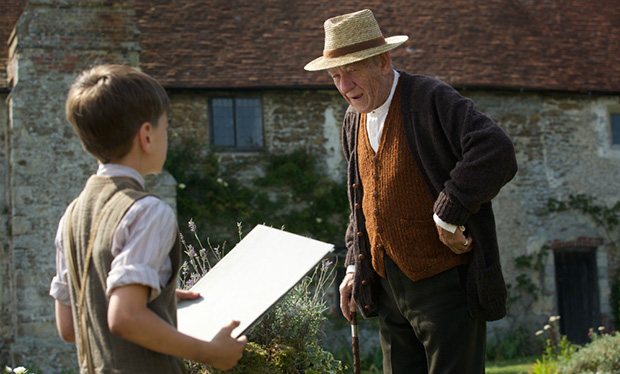 Based on Mitch Cullin’s 2005 novel “A Slight Trick of the Mind”, Mr. Holmes tells how the allure of a 50-year-old unsolved case pulls Holmes back into the world of deduction, even as his mind, in very un-Holmes-like fashion, is deteriorating with age. Also starring Laura Linney (host of PBS’ Masterpiece Classic series) and Hattie Morahan (last seen as Alice Merren in The Bletchley Circle), the film will feature flashbacks to Holmes’s prime sleuthing days in the early 1900s and his time journeying in Japan. Condon described the film as “a really great mystery about who Sherlock Holmes is, but it’s also a lovely, delicate movie about what happens as you get older.” Mr Holmes will have its first screening at the Berlin film festival next month.

For my money, Sir Ian McKellen could sit in a chair and read the phone book and I’d go see it.