A huge TOH to our friends over at the British Comedy Guide for guiding us over to the UsvsTh3m site where there is absolute proof positive of something many have known for decades. Douglas Adams was, and still is, a genius.  Adams, who is best known as the author and mind palace behind Hitchhikers Guide to the Galaxy and Dirk Gently’s Holistic Detective Agency, was always ahead of his time when it came to technology. One only has to go back a mere 25 years to 1990 (a lifetime and and a half in the world of technology advancement) to witness his insane ability to ‘predict the future’. Before that, in 1978, remember it was Adams who put something that closely resembled what would ultimately become the eBook in the hands of Arthur Dent as he traveled through the galaxy with Ford Prefect in search of the ‘answer to the ultimate question of life, the universe and everything‘, (it’s 42, BTW). 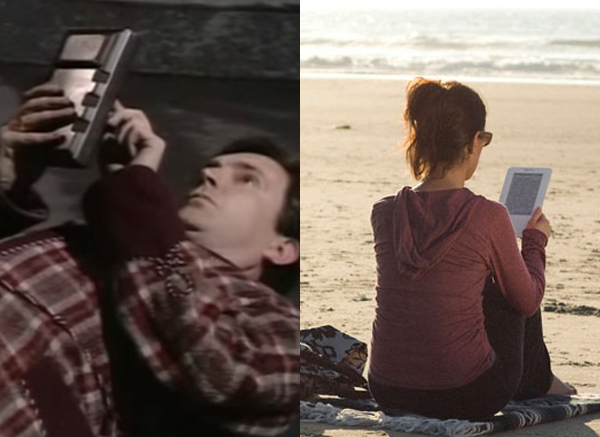 But, it was 1990 and the release of Adams’ Hyperland, a fantasy documentary that basically predicted the future of television where Adams really showed his stuff. It begins with him falling asleep in front of the TV dreaming that there “must be a better way of spending my time. It seems like such a waste of the technology. Maybe in the future we’ll find a better use to put it all to.” In a very Howard Beale-like fashion, an awakened Adams takes his TV down to the dump to throw it away, whereupon he meets a very familiar face to many, Tom Baker, who introduces himself as Tom, an ‘agent’. Clarifying that he was more of a ‘software agent’ than an agent that would immediately grab 15% of your earnings, Baker gives his best Google impression by stating that “I only exist as what we call an application in your computer. I have the honor to provide instant access to every piece of information stored digitally anywhere in the world. Any picture or film, any sound, any book, any statistic, any fact. Any connection between anything you care to think of. You have only to tell me and it will be my humble duty to find it for you and to present it to you for your interactive pleasure.

The UsvsTh3m site then goes on to elaborately demonstrate further Adams’ uncanny ability to tackle thoughts and possibilities that would soon become commonplace in today’s world such as the World Wide Web, YouTube, virtual reality and Netflix. It’s hard to believe that just 25 years ago, in 1990, most of the things that occupy way too much of our collective time today were more or less ideas and concepts at that point in time. If you have 50 or so minutes to spare, Douglas Adams’ Hyperland is a great watch. Enjoy.