Actress Geraldine McEwan, known primarily in recent years for playing Agatha Christie sleuth Miss Jane Marple on ITV and PBS, has died at the age of 82. McEwan, who appeared in 12, 2-hour episodes as Miss Marple, retired from the role of in 2008 saying: “Of course, it is terribly disappointing to have to pass the baton on, but it has been a marvelous experience to inhabit this role for the last few years. It’s been an absolute pleasure to work on Miss Marple since 2003, and I leave with fond memories.” 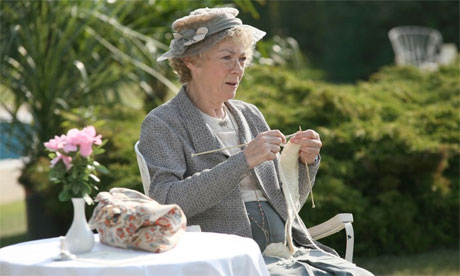 McEwan was also well-known for her role as Emmeline “Lucia” Lucas in Mapp And Lucia, a television series based on three 1930s comedy of manners novels by EF Benson which also starred Prunella Scales and Sir Nigel Hawthorne. The award-winning comedy was recently re-made by the BBC starring Anna Chancellor, Miranda Richardson and Steve Pemberton.

While she was considered the best Miss Marple by many, it was her role as Miss Farnaby that I will forever remember the most. Back in 2010, we spent time with Bob Larbey, who wrote the 12 episodes of Mulberry and Karl Howman, who starred as ‘apprentice Grim Reaper’, Mulberry, charged with escorting Miss Farnaby to the next world. Here, PBS’ Behind the Britcom hosts Philip Bretherton and Moira Brooker from As Time Goes By introduce writer Bob Larbey’s thoughts on how Mulberry should have come to an end while series star Karl Howman talks about how he approached his role as and, finally, a clip from Mulberry that makes one hope that Mulberry met Geraldine McEwan’s hand yesterday, walked with her across the bridge and is watching over her today and every day hereafter.