Laura Carmichael, who plays the seemingly forever-to-be-depressed Lady Edith in Downton Abbey, will play maid Henrietta in Madame Bovary, the new film adaptation of Gustave Flaubert’s 19th century classic, alongside her Downton Abbey crazy playboy uncle co-star Paul Giamatti (Sideways) and Rhys Ifans (Notting Hill). Besides his performance in Notting Hill, Ifans is most recently recognizable in America on the small screen for his recurring role as Mycroft Holmes in CBS’ Elementary series.

Probably getting a few pointers from Mrs. Hughes, Baxter and Anna, Carmichael will put aside her daily worries about the fate of Michael Gregson, trade in her fancy dress and her upstairs way of life at Downton for a maid outfit and a taste of the downstairs way of life. While ‘Henrietta’ was not in the original story, it is believed that the character is based on Heloise, the first wife of Madame Bovary’s husband Charles. 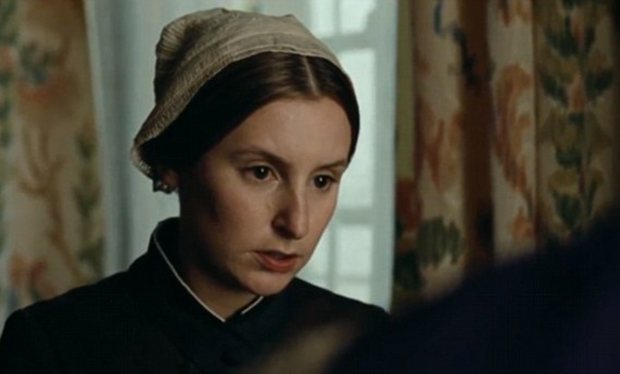 Mia Wasikowska, star of Tim Burton’s Alice in Wonderland, plays Emma, a young beauty who impulsively marries small-town doctor, Charlie Bovary, played by Henry Lloyd-Hughes (Harry Potter and the Goblet of Fire). Emma leaves her father’s pig farm (yes, she’s the quintessential farmer’s daughter) far behind but after being introduced to the glamorous world of high society, she soon becomes bored with her stodgy husband and mundane life, and seeks prestige and excitement outside the bonds of marriage. Set in Normandy, France and directed by Sophie Barthes (Cold Souls), the film will open later this year in the UK. No word yet on an American release date.