As if Comic Relief wasn’t already going to be the ultimate ‘must-see/appointment’ telly on March 13 given the recent announcements of the Dibley Town Council getting the band back together for a special edition to name the Bishop of Dibley and Rowan Atkinson returning for a new Mr. Bean sketch, but now you can add the likes of Dame Edna, AbFab greats Joanna Lumley and Jennifer Saunders AND Lulu all going head-to-head in the first of five special editions of Great British Bake-Off! 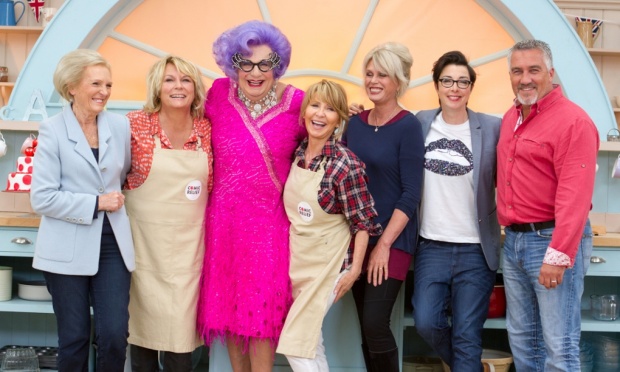 With the PBS broadcast of The Great British Baking Show (as it is titled in the States) having begun, America finally understands the concept of #GBBO fever. This now has worldwide implications to be more fun than the law allows. You can always count on the Comic Relief folks to come up with some pretty amazing sketches whether it’s a morph of Call the Midwife and Doctor Who or any one of a number of Vicar of Dibley bits, the whole British comedy and drama world throw their collective talents at this very worthy cause that was the brainchild of Richard Curtis and Lenny Henry. This year’s Great Comedy Relief Bake-Off is no exception. Beginning Wednesday, 11 February and running for four consecutive Wednesdays, celebrities crash the British Bake-Off tent with a competition to end all competitions, featuring the above celebs and also the likes of chat show host, Jonathan Ross, Sarah Brown, the wife of former PM Gordon Brown, comedians David Mitchell and Victoria Wood, fashion expert Gok Wan and model, Abbey Clancy.

Great British Bake-Off series regulars, Paul Hollywood and Mary Berry, return along with hosts/presenters Mel Giedroyc and Sue Perkins, who will be joined by comedians Ed Byrne and Jo Brand for this special celebrity edition that will look to crown the Comic Relief Star Baker at the end of the competition. Transmission schedule is as follows:

The Great Comic Relief Bake Off on BBC1: