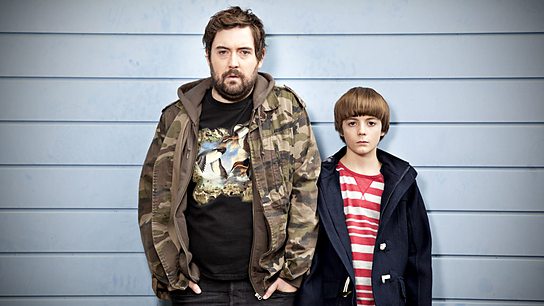 When we first met Andy (Nick Helm) in series one of Uncle, he was a lazy, unlucky-in-love, out-of-work musician. Not really what you’d call ‘uncle material’. Then there is Errol (Elliot Speller-Gillott), a somewhat nerdy, allergic to most everything, kid who desperately needs help with life. Errol and Andy’s unlikely alliance begins when Andy’s sister asks him to look after his nephew for a bit while she gets her life together. Let’s just say, neither of them are thrilled to be in each other’s company from the outset. Here, ‘Uncle’ Andy gives Errol some dating advice when dealing with ‘the most dangerous animal in the jungle – the female human’.

Andy’s advice? Well, besides being funny and definitely try never to be yourself, you write a song about how you feel about them, of course. He is an out-of-work musician after all.

Like most British situation comedies, the supporting cast is brilliant with Daisy Haggard as Andy’s sister, Sydney Rae White as Andy’s ex-girlfriend Gwen with Con O’Neill as Val, Gwen’s Dad and Andy’s worst nightmare. Series 2 begins tonight on BBC3 at 10:00p. Uncle is dark and very funny at the same time. The musical numbers, written by Helm, make the series and the relationship between Andy and Errol one to watch. Let’s hope is makes it to America in the not-too-distant future.