It worked for Jimmy Stewart in Harvey so why shouldn’t 12-year old Martin Moone (David Rawle) create his own imaginary wingman to help him negotiate life. In Moone Boy, Seán Murphy is the imaginary friend of Martin Moone, the youngest (and only male) child in perhaps the most chaotic clan in all of Ireland. Aided by his imaginary friend, Martin has a unique perspective on life growing up in the small town of Boyle in rural Ireland. His imagination comes into play both in his child-like drawings, which come alive through animation, and in the crazy 12-year old boy schemes he comes up with, many of which are against Seán’s better judgement. Whether it’s fitting in to a new school, agonizing over keeping ‘the alter boys code’ or having to deal with the likes of Trisha, Fidelma or Sineád, his three older sisters, Martin is doing his best to just try and survive his short life so far relying heavily on Seán for guidance, whether it be wise or ‘not-so-wise’. He’s not alone in the ‘having an imaginary friend department either as his best mate, Padraic (Ian O’Reilly), has his own made-up mate, the legendary wrestler Crunchy Danger Haystacks, played by Johnny Vegas. 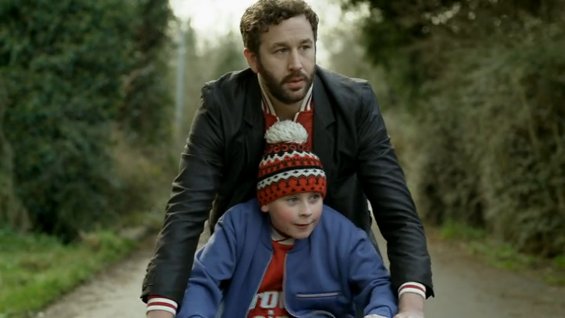 Set in 1991, series 3 will see O’Dowd make his directorial debut by directing one of the episodes and rumor is that he is writing a part specifically for broadcasting veteran and Limerick native Sir Terry Wogan as the host of a home video show in an episode that sees Martin and Padraic attempt to film an hilarious clip in a bid to be featured on TV. Sharon Horgan (Pulling) guests as a high powered, yoga-loving entrepreneur and ex-girlfriend of Martin’s dad, Liam. Seems as though Sharon left Boyle for London many years ago leaving a madly in love Liam behind. Both Debra and Liam get a surprise when they unexpectedly run into her while on a 20th wedding anniversary break away. John Sessions (Whose Line is it Anyway, QI) plays Dr Steven Gnot, local conspiracy theorist and radio presenter of “Believe It Or Not with Dr Steven Gnot”, who investigates the many anomalies that occur in Boyle, a town which is well-known to be Ireland’s foremost UFO hot-spot. Oh, and there is also a new grandchild in the Moone household for Martin to deal with too.

Co-written by Chris O’Dowd (IT Crowd, Bridesmaids) and Nick Vincent Murphy and shot on location in O’Dowd’s home town of Boyle, County Roscommon, County Wicklow and Dublin, the semi-autobiographical, coming-of-age situation comedy series won the International Emmy for Best Comedy in 2013 and is returning to Sky 1 HD for series 3 on Monday, 2 March. The first two series have found a good home on a number of public television stations in America with the third arriving Fall of 2015 after a short window on Hulu. If you haven’t yet ‘met the Moones’, now is the time to catch up before the March 2 premiere of series 3. You can thank me later….