With Doc Martin on their customary 18-24 month production hiatus, those that are in need of a Martin Clunes fix need look no further than the upcoming ITV drama, Arthur and George. Airing in March on ITV and then coming to PBS’ Masterpiece this Fall, Arthur and George showcases the talents of Martin Clunes, who plays the celebrated novelist and physician Sir Arthur Conan Doyle in a three-part adaptation of Julian Barnes’ novel, “Arthur & George”. 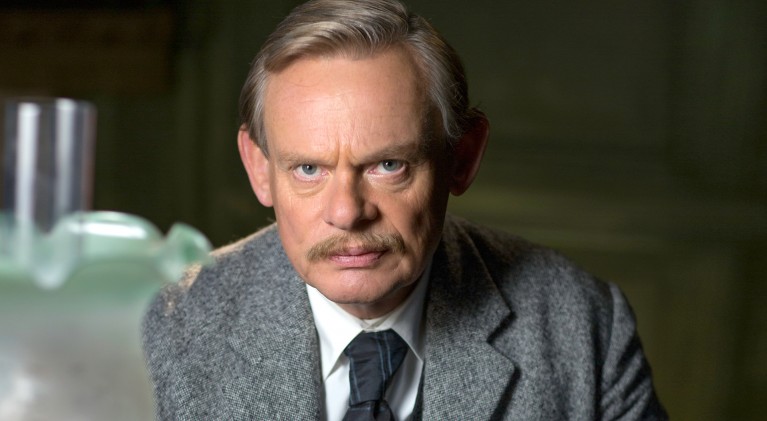 Based on a series of true events in the life of Sir Arthur Conan Doyle, the series showcases a fairly deciding moment in Conan Doyle’s life following the death of his wife, Louisa. It was at this point that even Conan Doyle described himself as a ‘bore and a sulk’. His life took a rather remarkable turn when he became possessed with pursuing and challenging a notorious miscarriage of justice. The case came along at just the right time allowing the author to really sink his teeth into something. That “something” was the case of George Edalji, a hard-working solicitor and the son of Hampshire vicar, Reverend Shapurji Edalji and his wife Charlotte. George has served seven years in Pentonville Prison for allegedly mutilating animals and sending threatening letters. The offenses have become widely known as the Great Wyrley Rippings.

Set in 1903 in Staffordshire, Hampshire and London with the backdrop of Conan Doyle’s family home, Undershaw, Arthur and George sees Sir Arthur joining forces with his trusted manservant, Alfred ‘Woodie’ Wood with whom he has a very strong bond (sounding a bit familiar?). On learning of George’s plight and glimpsing the headlines concerning the Great Wyrley Rippings, Conan Doyle urges Woodie to arrange a meeting with George, who is released from prison after serving three years of his seven year sentence. Now at 27, George is desperate to clear his name so he can return to his career.

Look for it next month on ITV in the UK and on PBS this Fall in the States. And, for Martin Clunes fans, watch it with the comforting knowledge that the world’s most curmudgeonly doctor with the most miserable bedside manner this side of Dr. Gregory House is returning to Port Isaac in the not-too-distant future to begin filming series 7 of Doc Martin.