Ok, once again, I’m a bit late to the telly party. It happens every so often just due to the sheer volume of good television that’s out there these days. Just in case you haven’t arrived yet either, I wanted to mention a title that, if you didn’t see on BBC2 back in January, you make every effort to find it on the BBCiPlayer or Netflix or somewhere in the not-t00-distant future. The Eichmann Show, starring Martin Freeman, is a riveting bit of telly. Martin Freeman is equally as brilliant. Just think, around this time, he’s bouncing from Sherlock to The Hobbit to Fargo to The Eichmann Show. 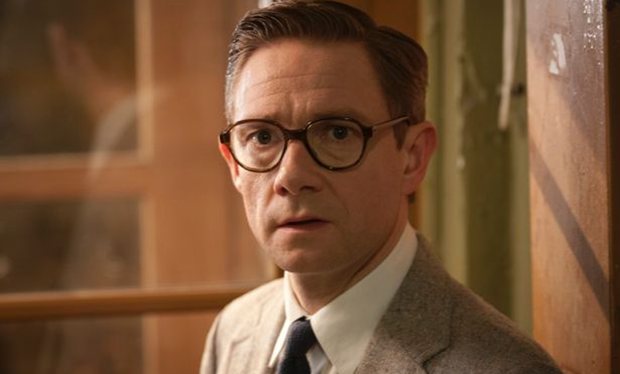 The Eichmann Show is the behind-the-scenes true life story of a groundbreaking producer, Milton Fruchtman (Freeman), and blacklisted TV director, Leo Hurwitz (Anthony LaPaglia), and their desire to capture the testimony of one of the war’s most notorious Nazis, Adolf Eichmann, during his trial in Israel. One of the more intriguing backstory bits of The Eichmann Show, however, is the underlying story of Hurwitz, who was blacklisted in America by Senator Joseph McCarthy for over a decade. It was Hurwitz and Fruchtman who convinced judges to reverse their decision to not allow cameras in the courtroom and grant permission to completely rebuild the courtroom with specially concealed cameras. Unfortunately, there is a whole generation fresh off of seeing the OJ trial and a host of other high-profile trials that can’t imaging a time when this was unheard of.

For four months, back in 1961, cameras would roll continuously capturing footage that was then frantically cut together and sent around the world so that a global audience could see that day’s riveting testimony from Holocaust survivor after Holocaust survivor. Aside from it being the trial of the century of someone who was one of the key architects of the Holocaust, The Eichmann Show gives an amazing behind-the-scenes account of just how these two men pulled this off. The use of actual archive footage from the 1961 trial makes it all the more chilling.

Whether you’re a Martin Freeman fan, a history buff or just like good telly, The Eichmann Show is one you should check out.