It may have been 25 years since Rowan Atkinson first gave voice to Mr Bean, but it is pretty clear that the British comic legend still has a great passion for the character that has over the last quarter of a century become one of the most recognized comedy creations on what,  we call, Planet Earth. With 65 million Facebook fans, 1.3 billion YouTube views, 35 million videos and DVDs sold and broadcasts in over 190 countries, you’ll get no argument from me that Mr. Bean has had (and will continue to have) a greater impact on the world of comedy than say, Katy Perry’s Left Shark dancer from the Super Bowl. A new series of Mr Bean: The Animated Series premieres Monday, 16 February at 9:25a and 4:45p on CITV, the children’s ITV channel in the UK. 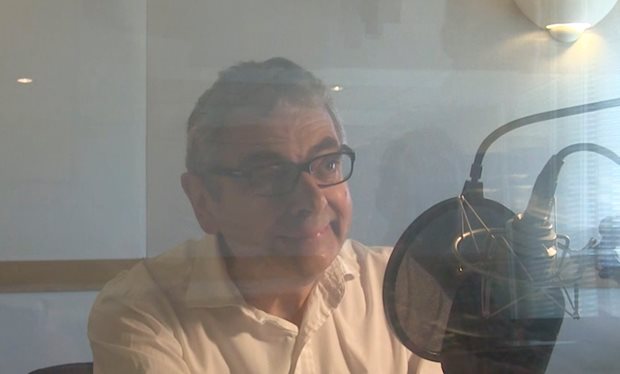 What is immediately clear from the behind-the-scenes clip is just how much effort it takes to bring Mr Bean to life, but just how much Atkinson cares about the character, even when the cameras aren’t officially rolling. Click here for a pretty cool (and exclusive) look at the brilliant work of Rowan Atkinson as he records bits for the new Mr. Bean: The Animated Series set to begin this week

“I suppose I have always completely believed in Mr Bean in terms of his ability to entertain but perhaps that’s just because I still find him an extremely amusing character,” said Atkinson of his self-proclaimed ‘child in a grown man’s body’. “There’s something about him which I still enjoy. I love him for his complete selfishness really. He’s a peculiar combination of candid innocence and vindictiveness. A completely self-centered and yet rather sweet natured character”.

New episodes of Mr Bean: The Animated Series will premiere Monday, 16 February at 9:25a and 4:45p on CITV, the children’s ITV channel in the UK. Take a look…