For those of you that may not be familiar with the annual BBC Showcase in Liverpool, this is the annual event put on by BBC Worldwide which showcases what’s coming up on the BBC in the forthcoming year. Approximately 750 TV programmers from around the world are in attendance for 5 days of non-stop, intense screening.

Whether it’s drama, comedy, natural history, science or documentary programming, we are screening some of the best television on television. Fortunately, much of what we see will make its way to a public television station near you in the 2015-2016 timeframe. I’ll get into more of what will be coming your way in the next few days but I had to give a quick shoutout before getting on the plane to come home to the oddly interesting (and pretty funny) final show/series that I saw yesterday afternoon based simply on title and concept alone….

The 6-part, semi-improvised comedy series sees David Hasselhoff (Baywatch, Knight Rider) playing a fictionalized version of himself after five divorces, with a previously unknown German son who breakdances rather poorly and a rather unique entourage. Shot documentary style, the series takes place some 30 years after ‘The Hoff’ rose to fame with his worldwide television hits, Baywatch and Knight Rider. In the UK trying to revive his career after landing a part in an independent film, ‘The Hoff’ and the director of the film have a few on-set clashes where it’s clear he has a very different vision for the project. You know what they say…”Don’t Hassel the Hoff!” if you know what’s good for you. 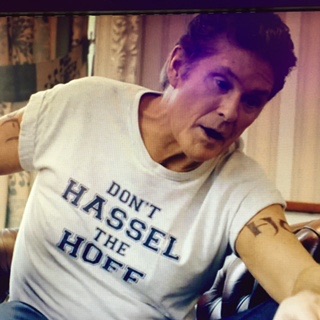 It’s now up to his UK manager to find him something more worthy of his worldwide talents. When early attempts at fronting a charity and then a short stint as a global peacemaker don’t entirely pan out, ‘The Hoff’ tries to get his career back on track and quickly make sense of his increasingly surreal life. Hoff the Record is directed by Natalie Bailey (The Think of It) and produced by Krishnendu Majumdar and Richard Yee (The Moaning of Life, An Idiot Abroad).

Look for Hoff the Record sometime in 2016. Hey, I can’t make this up…oops, time to get on the train to London!