For a bit of a different take on the classic Three Little Pigs story, Sesame Street had to look no further than the  House of Cards for their next parody target. The American version with Kevin Spacey, not the brilliant BBC series with Ian Richardson. Given the British focus of Tellyspotting, I find myself a bit biased and think that the Netflix version is a parody of the BBC one, so it seems only appropriate that Sesame Street leave the original BBC series alone and go right for the American re-make jugular. 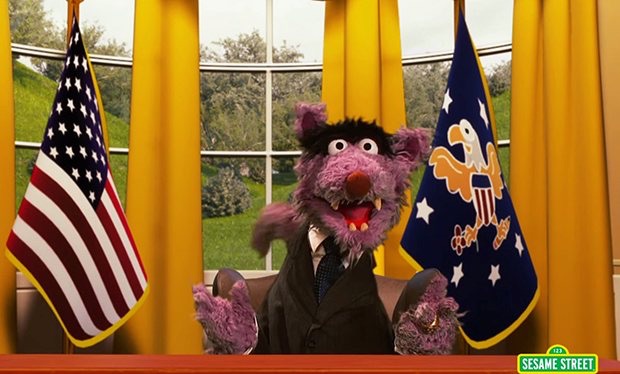 After an earlier spoof of Downton Abbey, the PBS children’s series proved once again that no series is safe from a bit of fun. The sketch features Frank Underwolf, complete with Kevin Spacey’s southern accent and side-monologues to the camera intact, determined to make his way to the White Brick House, even if that means trampling a few politicos in order to learn some basic math along the way.

Beginning Friday, remember, “In this town, you have to know which way the wind is blowing…and right now it’s about to get VERY windy”. The Sesame Street parody airs tod on PBS with the third series of the Netflix version of House of Cards premiering tonight on Netflix. My advice? Watch Sesame Street and then go binge-watch the BBC version….