There are some things in life that you just do not want to accept as fact. For me, growing up, it was that the hated and feared New York Yankees would pretty much be the odds-on favorite to win the World Series every year. Fortunately, times change and the Yankees are but a shell of their former self. Now, following last nights series 5 finale of Downton Abbey, the top of my adult list is that after next years’ series 6 finale, regardless if it’s the last one for the series, it looks like it will, quite possibly, be the last one for the Dowager Countess. 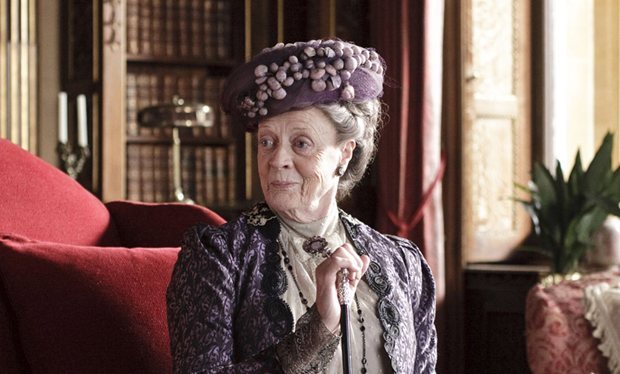 In an interview Sunday with the Sunday Times, Dame Maggie Smith alluded to the fact that the next series of Downton Abbey will be her last. Smith spoke about the speculation of the series coming to an end, “They say this is the last one, and I can’t see how it could go on, I mean, I certainly can’t keep going. To my knowledge, I must be 110 by now. We’re into the late 1920s.”

Aside from the fact that she feels like she’s edging towards 110 in “Downton Abbey-years”, it’s clear that the global success of Downton Abbey hasn’t been entirely welcome either. “One isn’t safe after doing Downton. What’s sad is I’ve gone through my whole life without any of that. I could go round galleries and things on my own and I just can’t do it now. If someone decides to get at you, you can’t get away”, said Smith.

Further proving her point, she went on to say, “What’s awful is it used to be just autographs, but now everyone wants photographs. You begin to feel like all those people who believed photographs took the soul away. There’s nothing like privacy, but nobody will have that soon. Nobody’s private any more.”

For the time being, I will hold out hope that they day we all knew would come someday, won’t in the foreseeable future. Between now and when the end of series 6 rolls around next year, whether it’s the last for the Dowager Countess or for Downton Abbey overall and until the official word comes down from on-high, at least I know I will have this to watch for many years to come…