As hard as it is, post-Downton Abbey, life can be good as long as there is a steady stream of news from the production set where cast and crew are currently filming series 6. Especially, if the first bit of news arrives only one week removed from the finale of series 5 was broadcast on PBS’ Masterpiece series.

Chances are, most of us won’t have the opportunity to visit either Highclere Castle where the exteriors are filmed along with a majority of the ‘upstairs’ interiors or Ealing Studios where much of all the ‘downstairs’ interiors such as the kitchen, servants’ quarters and working areas. It would probably be a lot easier to score a visit if you happen to be, say, the Duchess of Cambridge (or George Clooney). Well, the Duchess of Cambridge title worked for Kate Middleton, who will visit the Ealing Studios set on Thursday, 12 March, to meet the cast and crew during a special visit to the set. 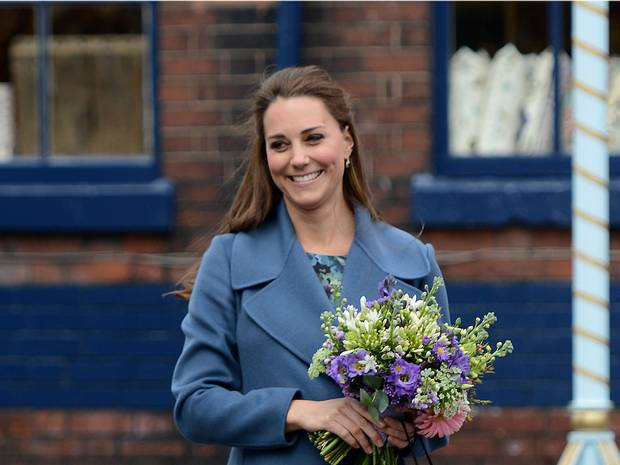 The Duchess will get a taste of life she, most likely, will never have to experience in real life as she heads ‘below stairs’ at Ealing Studios to watch the crew film a scene in the servants’ quarters of the aristocratic Crawley family home. According to Buckingham Palace, Kate will also visit with series creator/writer Julian Fellowes, as well as cast members Dame Maggie Smith, Hugh Bonneville and Robert James-Collier.

As part of the ‘royal’ treatment, the Duchess of Cambridge will be escorted around the set by series executive producer Liz Trubridge and pose with cast members and crew for photographs and witness make-up artists, costume designers, seamstresses and cutters at work. Given that her final duties of the day as Duchess will be to unveil a plaque alongside Hugh Bonneville to commemorate her visit, I’m guessing that her visit ‘downstairs’ is all good with Lord Grantham and won’t be the same as when he found out that Sarah Bunting headed downstairs to work the staff into a frenzy following dinner at Downton.

All in all, it should be as exciting for Kate as it is for the cast and crew of Downton Abbey as Prince William did admit recently that the royals are both big fans of Downton Abbey, saying that it was Kate who introduced him to the series following the birth of their son, Prince George, in 2013.