Starring Martin Shaw (Judge John Deed) as Gently and Lee Ingleby (Our Zoo) as DS John Bacchus, Inspector George Gently, the period crime drama, will return in 2015 with four new feature-length films set in 1969. Lisa McGrillis (Hebburn) also returns as WPC Rachel Coles. At this point, word out of the UK is that Inspector George Gently is being lined up for an April/May 2015 transmission date to be determined. In America, there is a good chance for a Fall 2015 return to public television stations. 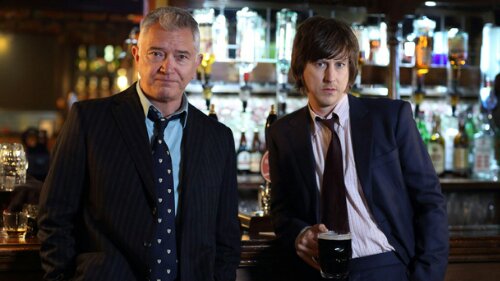 Writer Peter Flannery commented: “As the 60s draw to a close the issues facing policing seem more relevant than ever. We’re looking at the way rape complaints are met by the police – and nothing much seems to have really changed there, except perhaps the terminology. And we’re looking for the first time in IGG at corporate crime, which seems to be always with us. In Films 1 and 2 Gently makes it a personal task to challenge both vested interests and the traditional ways of doing things – to his cost.”

As with earlier series of IGG, series 8 will consist of four, 90-minute episodes. Pay particular attention to episode 3 as Jim Moir (a.k.a. Vic Reeves) stars as a shady pawnbroker with Louise Brealey (Sherlock) as a prime suspect, when the body of a man is found dead under the Tyne Bridge, following his friend’s 40th birthday party. Series 8 began filming on location in Durham and the North East back in the Fall. Here, series stars, Martin Shaw and Lee Ingleby share a bit of behind-the-scenes gold about taking over the town of Durham during filming and their on and off-screen friendship.