The good news is the we are under a double-digit number of months away from the long-awaited, highly-anticipated Sherlock special that is tentatively penciled in for Christmas 2015 on BBC One and PBS. Bad news is that we are still roughly 9 months out from seeing co-creators/writers Steven Moffat and Mark Gatiss get the band back together.

That said, there is news out of Austin, TX, of all places, regarding the forthcoming Sherlock special. Speaking before a PBS event at the annual South by Southwest mega-fest, Steven Moffat confirmed that the special will be set in Victorian London complete with stars Benedict Cumberbatch and Martin Freeman dressed in 19th century clothing. 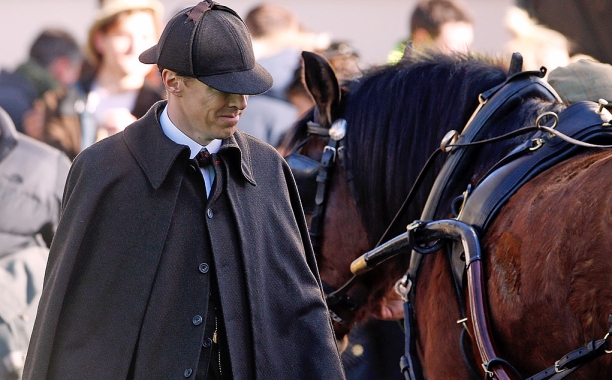 After spotting both stars in their period clothing during filming, fans immediately began to speculate more than the law allows trying to determine if Sherlock and Watson were merely attending a costume ball, or perhaps it was just some kind of dream sequence within the special. Moffat immediately put those rumors to bed by confirming that the entire 90-minute special will take place in the Victorian era.

“The special is its own thing,” Moffat told Entertainment Weekly before attending the panel at the South by Southwest conference on Monday. “We wouldn’t have done the story we’re doing, and the way we’re doing it, if we didn’t have this special. It’s not part of the run of three episodes. So we had this to do it – as we could hardly conceal – it’s Victorian. [Co-creator Mark Gatiss] and me, we wanted to do this, but it had to be a special, it had to be separate entity on its own. It’s kind of in its own little bubble.”

In addition to confirming the Victorian era storyline, Mr. Moffat also verified, to me anyway, that both self-described Sherlock fanboys, Moffat and Gatiss, are having WAY TOO MUCH fun when it comes to Sherlock….and, as a viewer, I don’t mind a bit because we are all the beneficiaries of their lifetime passion for all-things Sherlock.